Yesterday, a number of Israeli journalists were having a Twitter conversation about favorite songs. One of them – Yishai Harel – tagged famed American composer, lyricist, singer, rapper, actor, producer, and playwright Lin-Manuel Miranda. 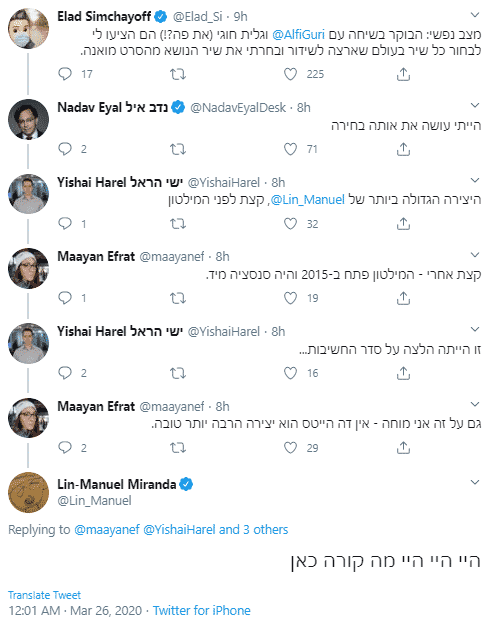 Elad Simchayoff: Mental state: This morning in conversation with @AlfiGuri and Galit Hogi (you here?!) they offered for me to choose any song in the world I would like to broadcast and I chose the theme song from the movie Moana.

Nadav Eyal: I would make the same choice.

Yishai Harel: The Greatest Creation Of @Lin_Manuel, right before Hamilton

Maayan Efrat: A little later – Hamilton opened in 2015 and was a sensation right away.

Yishai Harel: It was a joke about the order of importance …

Maayan Efrat: That’s what I’m protesting too – “How Far I’ll Go” is a much better work.

In case you think Lin-Manuel simply saw Hebrew and used Google Translate, don’t be too sure. He may very well have known how to write it himself.

You may have known that Lin-Manuel Miranda, Broadway darling and creator of the musical “Hamilton,” sang a “Fiddler On The Roof” song at his wedding party.

But did you know that he was also in a Jewish a cappella group in college?

Miranda, who is mostly of Puerto Rican descent, has long been a friend of the Jewish community. He told the New Yorker a few years ago that while attending the selective Hunter College Elementary School in Manhattan, most of his friends were Jewish. Before making it big on Broadway, he helped pay his rent by performing at bar and bat mitzvahs. In 2016, he appeared in a fundraising video for Yeshiva University — a school that gave him an honorary doctorate in 2009.