Terror tubby Abbas Hamideh and others have been posting a curious video clip on social media, ostensibly of an Arab man walking into a Jewish restaurant, after hearing from it music from the Quran being played by the Orthodox Jewish owner.

Hamideh (and others) have their take on this. 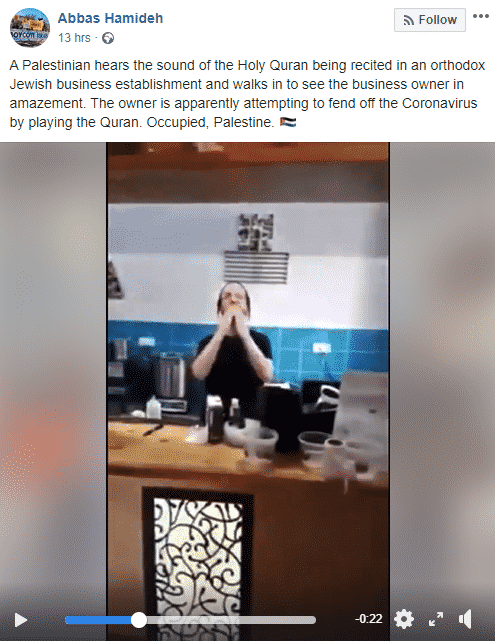 Of course, the more likely explanation is that he is trying to drum up business. Assuming the video was taken very recently, Jews have not been frequenting restaurants (in fact, restaurants, until recently, were only open for takeaway orders; now they are supposed to be closed). Assuming this restaurant is in an area where both Arabs and Jews reside, perhaps business has been very bad for the owner, and he figured he could attract Muslim clientele with some familiar music.

The fact the Jewish man says “Hakadosh Baruch Hoo” (a Jewish term for G-d) and not “Allah” is a further indication that my explanation is way more likely.

I should also point out that the Hebrew on the wall when the Arab man enters reads: “Love your neighbor as yourself.” So my theory would seem to fit also the character of the Jewish man.

Of course, ascribing this positive motive to the Jew is too much for Hamideh and company. There is only one logical explanation: the Jew submits to the supremacy of Islam!

Of course, Hamideh is not an antisemite, only an anti-Zionist.

Update: According to Israel’s Ministry of Foreign Affairs Account in Arabic:

An influential video from Israel .. In a gesture that touched Muslim citizens upon entering the Homs restaurant in the country, a recording of Surah Al-Fatihah was launched from the Noble Qur’an. The gesture was carried out by a Jewish religious worker in the restaurant, saying that this is God’s word. A clear message to all the people of monotheistic religions, we are all one.