Home Aussie Dave Latest Libel: The Execution of a Palestinian Youth As He Was Heading...

The Palestinian Information Center decries the killing of Mustafa Younes, who they claim was “slaughted in broad daylight” in front of his mother, as he was heading to the hospital. 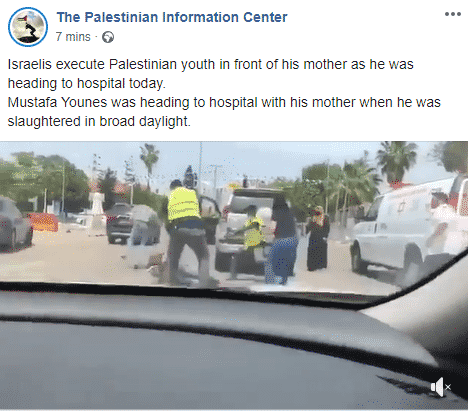 Naturally, they are missing some rather crucial details – and fabricating others.

In an incident that reportedly involved an argument with a doctor and a second row over wearing a mask during the COVID-10 pandemic, a man armed with a knife stabbed a security guard outside an Israeli hospital early on Wednesday afternoon, lightly injuring him, and then was shot dead.

According to a Channel 12 TV report, the incident at Ramat Gan’s Sheba Medical Center began when Mustafa Yunes got into an argument with his doctor during an appointment at a clinic there. He pulled a knife on the doctor and threatened her, the TV report said, but then left her office, and she did not report the incident.

He then got into a second argument over his refusal to wear a mask, Channel 12 said. Yunes, 26, from Arara in northern Israel, reportedly entered a shopping center near the hospital, and was approached by civilians who saw that he was not wearing a mask and asked him to do so. An argument developed and security guards came to the scene, at which point Yunes again pulled out his knife, but then put it away again. He then attempted to leave the hospital complex with his vehicle.

Security guards at the exit had been alerted that a potentially dangerous man with a knife was heading their way, and they stopped Yunes’s car for inspection. At this point another argument developed and Yunes pulled out his knife a third time. He apparently stabbed the guard before being shot fatally, the TV report said.

Besides the fact he was carrying a knife he was all too willing to use, he was not a “youth” (he was 26) nor was he even palestinian (he was an Israeli-Arab).

The only thing true about what they wrote is the incident occurred in daylight.