Palestinians Seethe Over Inclusion of Israeli on Facebook’s Oversight Board

Last month, the 20 founding members of Facebook’s Oversight Board, an independent organization tasked with content moderation on the social media platforms, were announced. The board was a response to growing criticism regarding a lack of transparency and consistency in the platform’s decision-making processes regarding freedom of expression.

The members announced today reflect a wide range of views and experiences. They have lived in over 27 countries, speak at least 29 languages and are all committed to the mission of the Oversight Board. We expect them to make some decisions that we, at Facebook, will not always agree with – but that’s the point: they are truly autonomous in their exercise of independent judgment. We also expect that the board’s membership itself will face criticism. But its long-term success depends on it having members who bring different perspectives and expertise to bear.

You’d think the palestinians – who have seethed over Facebook’s blocking of pages glorifying palestinian terrorism – would be thrilled over the composition of this board. 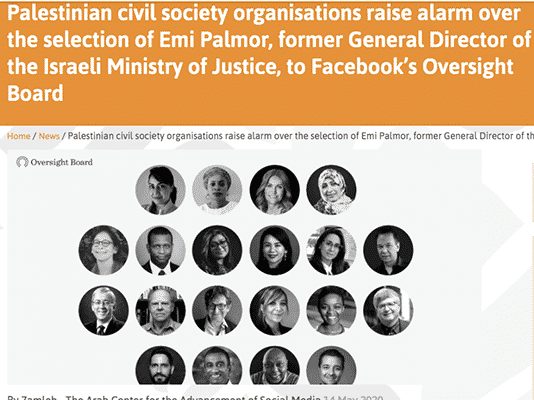 Palestinian civil society organizations condemn the selection of Emi Palmor, the former General Director of the Israeli Ministry of Justice, to Facebook’s Oversight Board and raises the alarm about the impact that her role will play in further shrinking the space for freedom of expression online and the protection of human rights. While it is important that the Members of the Oversight Board should be diverse, it is equally essential that they are known to be leaders in upholding the rule of law and protecting human rights worldwide.

Palestinian civil society, comprising of the undersigned Palestinian networks, which include dozens of member organizations, urge Facebook and its Oversight Board to consider the grave consequences that electing Emi Palmor may have particularly on Palestinian human rights defenders and on freedom of expression online in defence of Palestinian rights.

This is typical of the palestinian mentality we have seen time and again, including when they spurned a number of generous peace proposals. They want everything their way and will cry if they don’t get it – even when what they do get seems to be in their favor.