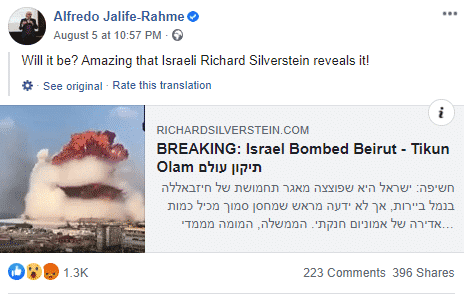 And who is this guy? This is how he describes himself on Facebook (auto-translated from Spanish):

Humanist Founding member and of the Governing Body of the International Physicians for the Prevention of Nuclear War (IPPNW): Nobel Peace Prize 1985 and Education Prize for Peace-UNESCO 1984

This was also how he described himself on Twitter, before removing it. 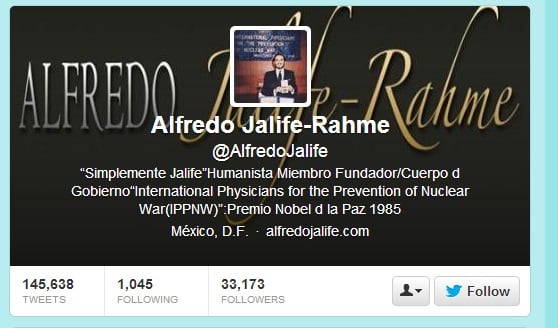 Him removing it from Twitter might have something to do with this piece by Guadalupe Lizárraga, a freelance journalist, who felt he was representing himself as having won the 1985 Nobel Peace Prize…as well as other things that she finds are not true.

Well known editorialist for “La Jornada” and prolific Twitterer Alfredo Jalife, wears the garb of nationalism and defense of good causes. He has embroidered this image with admirable tenacity.

However, reading about his proclaimed “1985 Nobel Peace Prize” motivated me to investigate this impressive achievement of which I had no prior news.

The result has been disappointing. In fact, it was the two founders of the organization “International Physicians for the prevention of nuclear war”, the Russian Yevgeny Chazov and the American Bernard Lown (the latter, whom Jalife, they say, calls a “Khazar”) who received this award for his tireless research, organizing and lobbying for peace in times of nuclear confrontation.

The organization, says Chazov when receiving the Nobel:

“… .., which has come to be called“ International Physicians for the Prevention of Nuclear War ”has grown rapidly: physicians from 11 countries participated in its first international congress in the USA in 1981; the fifth congress in Budapest in 1985 attracted delegates from over 50 countries. The small group of Soviet and American physicians grew to become a multinational army of 145,000 activists, who devote their free time to research on the possible consequences of nuclear war and to explain the data obtained to governments, politicians, scientists, the public and international organizations ”

In other words, Jalife has appropriated the Prize and does not bother to clarify the circumstances or the existence of 145,000 people registered at that time in the movement. Something smells bad.

To analyze the validity of this behavior, let us consider that other mass organizations, including the European Union in 2012, have also received the Nobel Peace Prize. This implies that, if we follow the example of Mr. Jalife, the more than 500 million inhabitants of the European Union, including the military, riot police and criminals who remain imprisoned in European prisons could claim to have received the Prize Nobel Peace Prize that year. The saying of Jalife is then little attached to the truth. But unfortunately (for his thousands of followers) his problems go further. Perhaps pressured for not belonging to the National System of Researchers of Mexico or the Mexican Academy of Sciences, or Academies of Medicine or of another nature, he is forced to exaggerate or invent recognitions.

To summarize: To my growing alarm, I have concluded that Mr. Alfredo Jalife is not a Nobel Peace Prize winner (or as much as the criminals and gangsters imprisoned in Europe), he is not a member of the Mexican or foreign Academy that has recognized for its contributions to culture and was not “awarded” any prize by UNESCO. If anything, this body helped transport him to a low-ranking university to give a lecture. Nothing to brag about and “write home.”

I am also forced to conclude that when someone exaggerates, boasts and lies in this way of (exaggerated or false) achievements, the hopeless impression arises that they are hiding serious doubts about their real worth. “The Emperor is naked,” would shout some insightful child from a classic tale.

Sad spectacle. Not to mention here the rest that I have discovered in these days: her

Read the entire thing and (use Google translate if like me you do not understand Spanish). 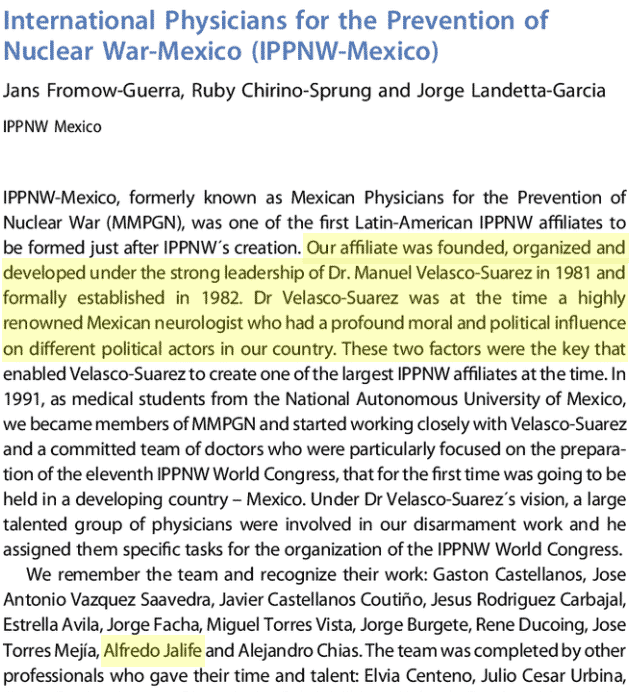 In addition, he posted this on his website, which definitely is there to suggest he won the Nobel. 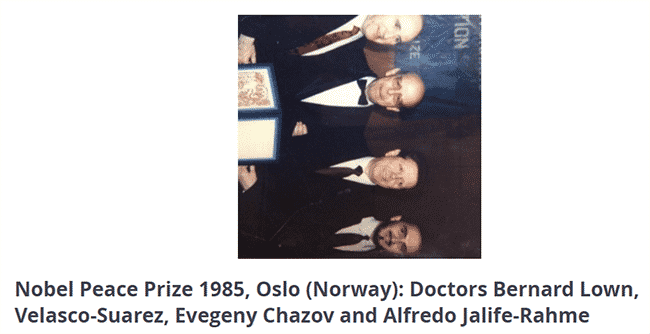 I cannot find the source for the photo, and for all we know, he was just posing with the actual winners.

Also not surprisingly, he is a Jew hater. As mention above, he referred to Bernard Lown as “Jazaro” (Khazar), and he has said the same about others. He also spells “Zionist” and “Soros” with dollar signs. 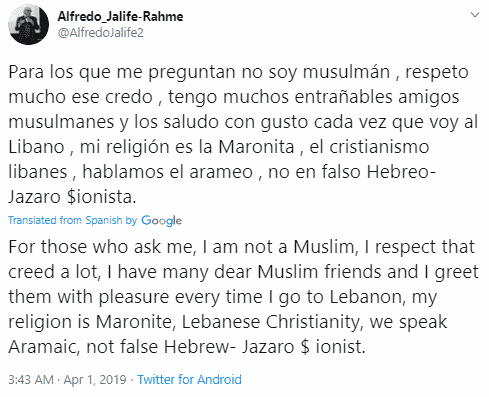 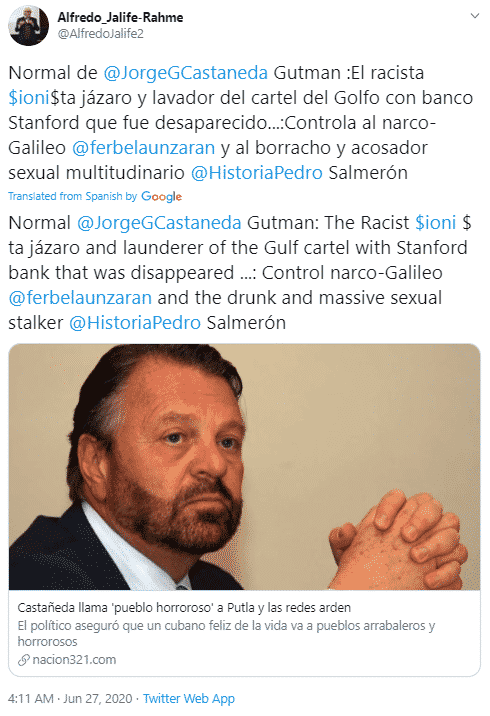 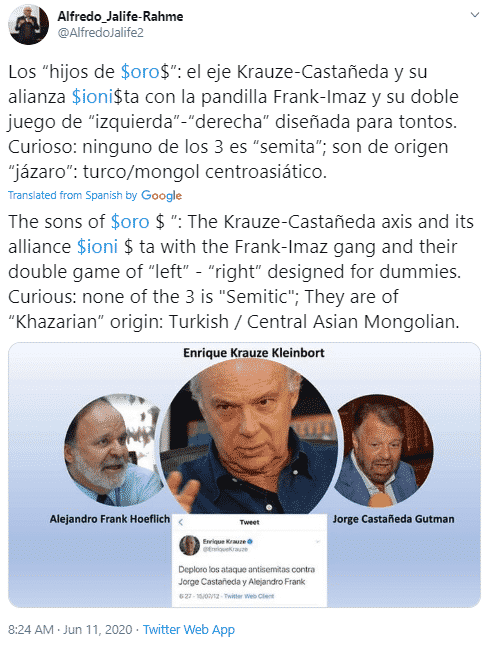 And in his Twitter profile, he refers to himself as “authentic semite.” 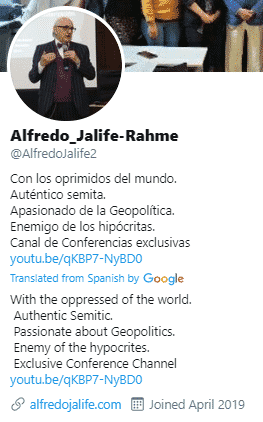 In other words, it seems that Jalife-Rahme is like Silverstein himself: antisemitic, seems to have a very high opinion of himself, and makes himself out to be someone he isn’t.