Last night, some guy held what he billed as a “great debate” – between Israel advocate Hen Mazzig and Israel-hater and human exclamation point Ariel Gold.

How any debate with Gold as one of the participants can be called “great” is beyond me.

I have to admit, I did not watch it (I am in the middle of a Gordon Ramsay Kitchen Nightmares binge, which are enough nightmares for one evening without bringing Gold in to it), but I heard she was true to form.

To make matters worse, Gold think she won the debate (which I assume is an impossibility, even though this is all I’ve seen of it). 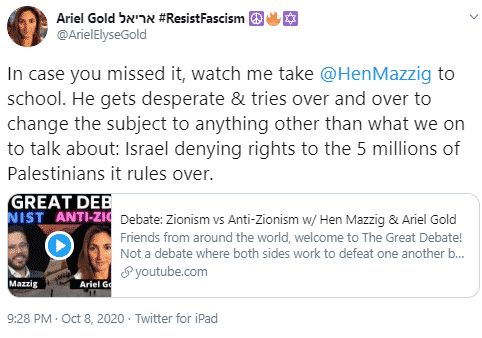