Know Your History: Booming Bethlehem Businesses Because of the Jooooos (NY Times Dec 23, 1970)

One of the facts that is lost because of the constant barrage of misinformation about the conflict is how the palestinian Arabs benefited financially from Jews after we liberated Judea and Samaria in 1967, until before the first Intifada. Since then, with increased terrorism and security restrictions in place, less Jews go in to the palestinian Arab towns to do business, and palestinian Arab businesses have suffered.

This New York Times article from almost exactly 50 years gives an example of how just three years after the Six Day War, business had dramatically improved for some Bethlehem-based handicraft manufacturers. 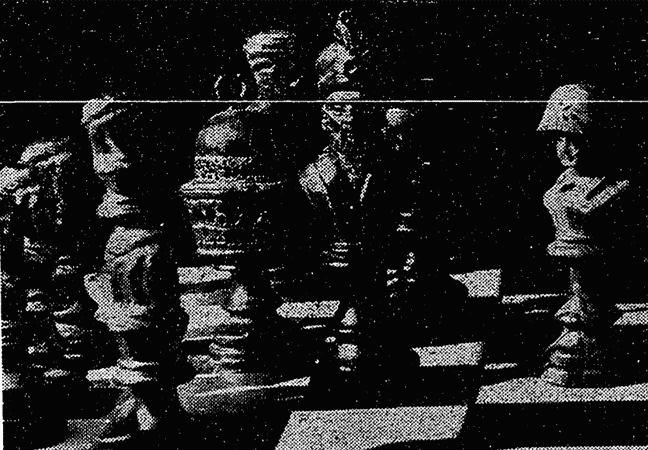 BETHLEHEM, Israeli‐Occupied Jordan, Dec. 21 — The politieg of the Middle East have found their way into the local Christian Arab handicraft industries — with the lucrative result of some untraditional customers and unexpected new products from the birthplace of Jesus.

The popularity of so‐called nativity sets, or crèche fig ures in olive wood, which used to account for the bulk of Bethlehem’s output, has now fallen well behind figurines of Moses holding the tablets and other items of Jewish interest.

The most novel product is a chess set, the pieces on one side carved to represent Arabs, those on the other side Jews.

“We make up both kinds of chessmen—most custom ers take Arabs fighting against Jews, but a lot of people also want Arabs fight ing Arabs or Jews fighting Jews; we’ll put them together any way they want,” said Hanna Michael Zakharia, one of the town’s major manufac turers.

Three and a half years of Israeli occupation have stimulated the local crafts men into work far from the traditional handicrafts in olive wood and mother of pearl. Since the Crusades and through all the waves of Christian pilgrims since, Bethlehem has been a center for the manufacture of reli gious objects.

“Within a week after the war in 1967, we started mak ing Jewish items — Moses, Menorahs and that sort of thing,” said Mr. Zakharia, who is the third generation of his family engaged in the wood‐carving business.

“Before the war our out put was 100 per cent religious articles — Christian articles. Now that’s only about 30 per cent of our business, with Jewish items accounting for half of our output. The rest is chess sets, with figures of Crusad ers or Arabs and Jews.”

Mr. Zakharia’s factory em ploys 30 workers, plus about 20 others who work in their homes. With two modern West German lathes, ca pable of carving out up to a dozen copies at the same time, Zakhaiia Brothers is typical of Bethlehem’s mass production.

Far less mechanized is the work of Elias I. Giacaman, 61 years old, who has man aged a factory in Bethlehem since 1928, doing delicate mother‐of‐pearl inlays and carvings, mostly of nativity scenes and stars of Beth lehem.

“All our shells for mother of‐pearl work are imported, usually from Australia or New Zealand,” Mr. Giacaman said, “but they have been re garded as the typical relic of Bethlehem.”

“It was the Crusaders who first introduced mother‐of pearl here, to give the local people work, and the indus try has gone on ever since.”

More than 1,000 persons are employed in the Bethlehem handicraft indus tries; most of the work is for export, and is wholesale, so the local manufacturers are reluctant to talk about prices or the cash volume of their business.

Besides the factories of Zakharia Brothers or Elias I. Giacaman and Son there are dozens of small crafts men who work alone or em ploy one or two helpers. One such is Hagop Avakian, a 45‐year‐old former boxer, who spends as long as 10 days carving a single figure of Michelangelo’s David in olive wood grown in the Holy Land.

“Jews are the best busi ness now, there is no doubt —I get many orders for my Menorah or Moses from the United States,” he said. “But the Christian business is still good, too.”

A reminder at what could have been had the palestinian Arab leadership not resorted to terror, and allowed peace to take root at grassroots level.

Meanwhile, how on earth did this get past the chief editor?

On the Jewish side of the chess sets, the rook is carved to look like the Wailing Wall, and the Arab rook is the Dome of the Rock in Jeru salem. The pawns are Arab and Israeli soldiers. The Jewish bishop is a familiar looking military man with a prominent patch over his left eye.

“We carved the Arab king to look like Abdullah, the old King — we thought Hussein would be too young,” Mr. Zakharla explained, referring to King Hussein’s grandfath er. He added that they also decided against making the Jewish queen look too much like Premier Golda Meir.

“We’re not sure that people would want that,” he said.