Antisemite “Abumination” Ali Abunimah constantly finds himself on the wrong side of history and morality. Besides his antisemitism and dissemination of absolute falsehoods regarding Israel, he and his Electronic Intifada have defended the brutual Assad regime in Syria.

He’s back at it again, this time declaring the Uyghur genocide as a hoax – naturally started by a “Zionist.” 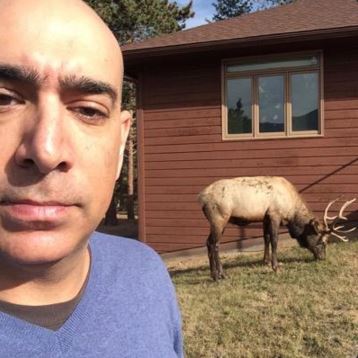 China genocide claims
Emgage’s refusal to support a boycott of Israel contrasts with its advocacy in support of a boycott of goods manufactured in China over allegations they are made with the forced labor of Muslim Uyghurs in Xinjiang province.

The day before leaving office, Trump administration Secretary of State Mike Pompeo issued a determination that China is committing genocide against the Uyghur population.

These are the gravest possible accusations that demand close scrutiny and compelling evidence.

State Department lawyers reportedly doubted that there was evidence of genocide, but still assert that there are widespread abuses in Xinjiang. It is unclear, however, what sources they are relying on.

The Biden administration is reviewing its predecessor’s genocide designation after acknowledging that “all of the procedures were not followed.”

In the meantime, however, Biden’s officials continue to use the term.

Many well-meaning people have supported the well-publicized campaigns around the Uyghurs, without realizing that the allegations of genocide, forced labor and mass internment are rooted in dubious claims, falsehoods and outright speculation stemming almost entirely from a single source: Adrian Zenz, a far-right anti-Semitic German Christian Zionist affiliated with the US government-founded Victims of Communism Memorial Foundation and the neoconservative Jamestown Foundation.

Yet as journalists Max Blumenthal and Gareth Porter of The Grayzone recently demonstrated, Zenz’s research is rife with “flagrant data abuse and outright falsehoods.”

While major human rights organizations have not endorsed Pompeo’s genocide determination, Human Rights Watch has relied on Zenz’s dubious research to assert the use of forced labor.

Both Human Rights Watch and Amnesty International have cited Zenz as their sources for the widely repeated claim that more than a million Uyghurs have been detained in internment camps.

Yet as Blumenthal and journalist Ajit Singh demonstrated in 2019, the claim of a million or more detained people is based on two “highly dubious ‘studies.’”

One, by the US-government funded Network of Chinese Human Rights Defenders, concluded that millions of people had been detained in Xinjiang by extrapolating from interviews with a mere eight individuals.

Similarly, “Zenz arrived at his estimate [of] ‘over one million’ in a dubious manner,” Blumenthal and Singh note.

Journalist Dan Cohen recently produced this video that provides an overview of how Zenz’s dubious claims have taken on the tenor of unquestioned truth, while Zenz and his extremist and anti-Semitic views have escaped scrutiny:

Note how now Abunimah refuses to believe Human Rights Watch and Amnesty – but when it comes to any reports of theirs condemning Israel, he is very quick to endorse them. Now they cannot be trusted on the Uyghurs. Meanwhile, Abunimah considers Hamas and their institutions to be reliable sources.

There is plenty of evidence to support the genocide of Uyghurs, even beyond Zenz. Countries around the world besides the US have recognized it as a genocide. Yet Abuminah and his Electronic Intifada cohorts are spreading the narrative that nothing of the sort is going on.

I would not be surprised if one day it emerges how Abunimah et al. have been on the Russian and Chinese payrolls all this time.