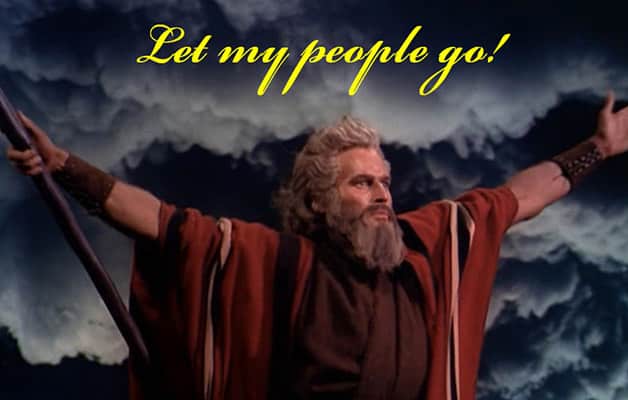 “Go Down Moses” is a spiritual phrase that describes events in the Old Testament of the Bible, specifically Exodus 5:1: “And the LORD spake unto Moses, Go unto Pharaoh, and say unto him, Thus saith the LORD, Let my people go, that they may serve me”, in which God commands Moses to demand the release of the Israelites from bondage in Egypt. This phrase is the title of the one of the most well known African American spirituals of all time. The song discusses themes of freedom, a very common occurrence in spirituals. In fact, the song actually had multiple messages, discussing not only the metaphorical freedom of Moses but also the physical freedom of runaway slaves, and many slave holders outlawed this song because of those very messages. The opening verse as published by the Jubilee Singers in 1872:

The lyrics of the song represent liberation of the ancient Jewish people from Egyptian slavery, a story recounted in the Old Testament. For enslaved African Americans, the story was very powerful because they could relate to the experiences of Moses and the Israelites who were enslaved by the pharaoh, representing the slave holders, and it holds the hopeful message that God will help those who are persecuted. The song also makes references to the Jordan River, which was often referred to in spirituals to describe finally reaching freedom because such an act of running away often involved crossing one or more rivers. Going “down” to Egypt is derived from the Bible; the Old Testament recognizes the Nile Valley as lower than Jerusalem and the Promised Land; thus, going to Egypt means going “down” while going away from Egypt is “up”. In the context of American slavery, this ancient sense of “down” converged with the concept of “down the river” (the Mississippi), where slaves’ conditions were notoriously worse, a situation which led to the idiom “sell [someone] down the river” in present-day English.

In other words, this is verse from the Jewish bible, describing liberation of the ancient Jewish people from Egyptian slavery, which was co-opted by enslaved African Americans, as a message of hope.

I don’t recall any Jew ever finding offense with this, especially given how Jews have been front and center when it comes to fighting for the rights of other minorities. I personally find no offense in this either.

I say all of this because “Rabbi” Ruti Regan, whose true religion is certainly not Judaism, wants non-Black Jews to stop singing it at Passover seders. 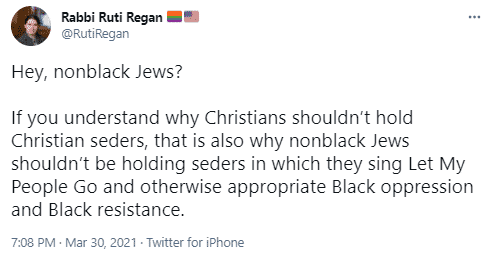 Yup, Jews shouldn’t co-opt something that was co-opted from us to begin with.

I guess it is lucky the song was not sung at this seder some years ago. That would have made it even more awkward.

So, first no more matzo ball soup and now no more “let my people go” (for those who do sing it at their Seder). What’s next? No more matza because we are co-opting constipation from those who are full of sh*t?

I suggest Ruti Regan stop co-opting the title of Rabbi and my religion. She is as kosher as a bread roll on Passover.