Congresswoman Rashida Tlaib has been tweeting up a storm inciting against the Jewish state. But it seems in her zeal, she made one hell of an oopsy:

I was 7 years old when I first prayed at the Al Aqsa with my sity. It's a sacred site for Muslims. This is equivalent to attacking the Church of the Holy Sepulchre for Christians, or the Temple Mount for Jews.

Israel attacks it during Ramadan. Where's the outrage @POTUS? https://t.co/Q4gGBrCOof 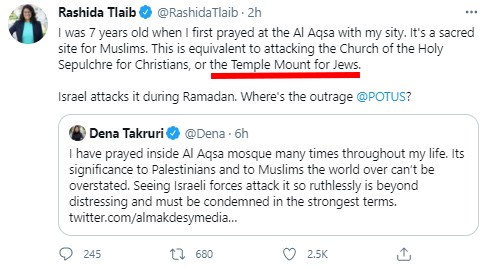 By admitting to the existence of the Temple Mount, she is doing more than merely its importance to the Jews (and thus also aknowledging we should also be allowed to pray there). The Temple Mount is the very site upon which the Al Aqsa mosque was built. So she is also admitting to the Islamic colonization of the area!