Former US Congresswoman Cynthia McKinney has tweeted that “Zionists” perpetrated the September 11 attacks: 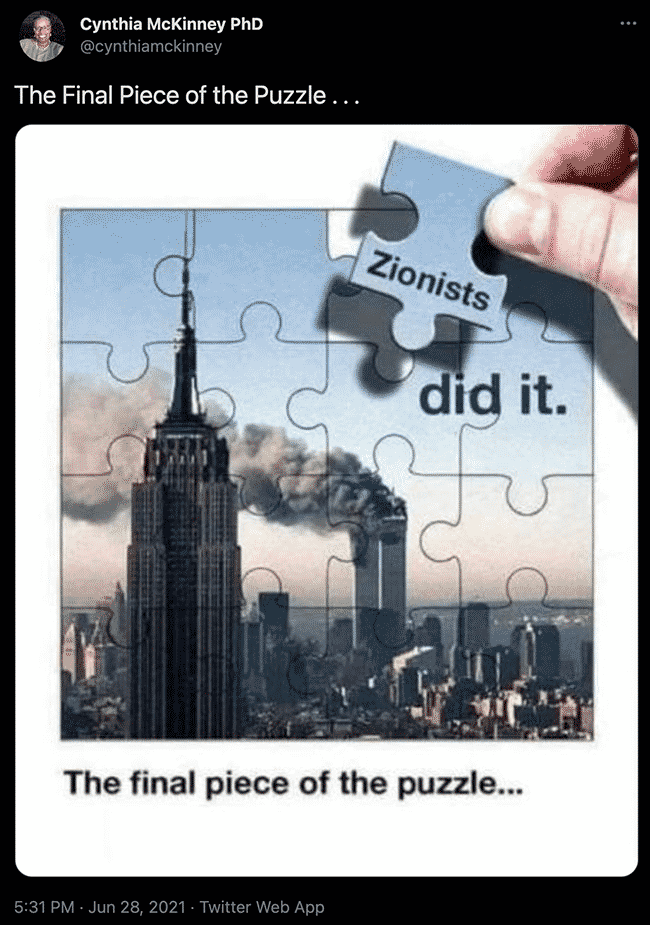 My reaction has been that of frustration.

I literally exposed a chilling conversation she had with White Supremacists – in which she spoke about the need for Blacks to unite with the KKK to defeat the Jewish enemy, and lamented you “can’t wipe [the Jews] out,” among other things – and not one news outlet (Jewish, Israeli or otherwise) ran the story.

Now all of a sudden, they are taking notice; take The Algemeiner, for example:

Former US Congresswoman Cynthia McKinney, who has long been noted for antisemitic and conspiratorial statements, tweeted on Monday that “Zionists” committed the September 11, 2001 terror attacks.

McKinney — who served in Congress from 1993-2003 and 2005-2007 as a Democratic Representative from Georgia — posted an image to Twitter on Monday showing the twin towers of the World Trade Center ablaze on 9/11, presented as a jigsaw puzzle.

Over the words “the final piece of the puzzle,” a hand inserts the last piece, forming the words “Zionists did it.”

It was not the first time McKinney has engaged in antisemitism.

In May 2020, she posted several Holocaust denying tweets. Linking to an article from the Israeli daily Haaretz that explored the issue of how the number of victims of the Holocaust was calculated, she commented, “So, the figure wasn’t six million after all?? What about those punished and even imprisoned for saying so?? Is this a ‘You can’t say, but I can’ kind of thing??”

After criticism from commenters, McKinney responded by saying, “Haaretz writes, ‘According to Yad Vashem’s estimates, once the double listings are removed, the database contains about 4.8 million names.’ I post. Message to me: ‘What turned you into an anti-Jewish bigot and Holocaust denier? You’re a piece of s**t.’”

The article in fact did not say the 4.8 million names were the final tally of victims, only that the names of the rest are likely to remain unknown.

McKinney also has a long history of anti-Israel activities, including participating in two attempts to breach the Israeli naval blockade of the Hamas-ruled Gaza Strip.

It’s not just the media. The every increasingly useless ADL have nothing about this either.

My point with this post is not “I told you so.” It is “we need to take our fingers out and understand the extent of the evil we are facing if we are to defeat it.”