Concern over earlier reports of increased rates of physical birth-defects and stillborn deliveries are heightened in the southern Gaza Strip after Director of Social Health Department in the de facto Health Ministry Salah Rantisi announced that he found an additional foetus with physical mutations in an ultrasound.

Rumors have been circulating that the defects are the result of nuclear materials dumped from the Israeli nuclear facility near Dimona.

In recent weeks the Palestinian Environmental Quality Authority announced the beginning of a field survey to measure the effects of nuclear radiation, possibly emanating from Israeli military facilities, in the eastern Gaza Strip.

For their part, environment authorities in the Gaza Strip said in a statement on Monday that no radiation has been found in the air in Khuza’a. However, they suggested that radiation could be found in the earth or in water resources.

The statement explained that a technical team examined the area and found no radiation. The team encompassed experts from the power authorities, natural resources authorities and the Islamic University of Gaza.

Of course, in the Palestinian Arab psyche, if any kid is found with a birth defect it must be the fault of Zionists. Evidence really isn’t necessary, because it is so blindingly obvious that Zionists are behind every natural problem.

For those who are interested, here is a map of the Negev: 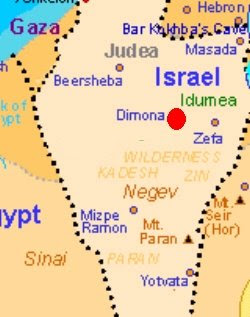 The diabolical Zionists have managed to find a way for their radioactive materials to pass over Beersheba and countless other Jewish communities without causing any harm, and they only target pregnant Arab women in Gaza!