Richard Behar is the Contributing Editor, Investigations, for Forbes Magazine, and is writing a book about Bernie Madoff. He’s recently published a revealing first look at the Madoff information he’s uncovered.  He’s not doing cartwheels over the current state of investigative journalism, but is an eternal optimist. www.richardbehar.com Twitter: @beharjournalist

I received a request from an award-winning journalist to connect on LinkedIn. He is Islamabad-based, and he describes himself as South Asian Bureau Chief for the Los Angeles Post, and a contributor for Al Jazeera, Gulf News and Deutsche Welle. He is also, according to a bio, working for a group called the Asian Human Rights Commission in Hong Kong, and he serves as the president of a group called Consortium for Press Freedom (CPF). He defines himself as an expert on Al-Qaeda and the Taliban.

Naturally, I was curious about his accomplishments as a reporter— they include a prestigious journalism honor in 2012 from Syracuse University called the “Mirror Award”—so I spent a few minutes last night exploring him on the Internet. Wish I hadn’t, because what I found kept me dead-awake for hours ruminating about relatives of mine (including foster grandparents) who were murdered in Nazi death camps.

See, the reporter who wants to LinkIn with me, Malik Ayub Khan Sumbal, tweeted something last summer (August 2nd) that feels to me like a kick in the face—only worse; far, far, far worse: “Let me #?Salute to #?Hitler # Gaza #?jews #?Israel #?jewish.” Below it: A poster of Hitler that read “LET ME SALUTE TO HITLER THE GREAT. He said ‘I would have killed all the jews of the world, but I kept some to show the world why I killed them.’”

With the Fuhrer now blocking my sleep, I sent a short message to Sumbal [on Facebook], asking him, “Why did you tweet this?” His response was: “hi Richard this is just a retweet nothing else.”

Nothing else. As if that would make it okay. In fact, it appears to be a direct tweet from him #?ayubsumbal to his followers.

[Next, he sent me a “friend” request on FB. And then felt he had to remind me of it: “I have sent you a request Richard on Facebook.” Indeed, sir, I noticed.]

Two hours later, he obviously thought about it some more, and wrote: “I am sure the quote attributed to Hitler is wrong and a social media propaganda campaign against the jews.” Perhaps. But it’s a campaign that Sumbal himself clearly took part in. “No one can deny the genocide and the crime Hitler did,” he added. That’s comforting news from the journalist.

Still feeling somewhat rejected as a living Jew, I explored further. This reporter, who won a big award at Syracuse—a university that Hillel calls one of the Top Ten of private colleges in terms of Jewish student population—displayed another image last August on Twitter, this one of the Israeli flag. The flag featured a Star of David on the forehead of a skull, and it read, “Israel is a Terrorist State.” I guess Sumbal should know, given that he’s an expert, as he says, on groups like Al-Qaeda.

Sadly and ironically, the article he won the award for was published in something called “iMedia Ethics.” (His co-writer of the article was a Rhonda Roland Shearer, the publication’s publisher.)

On his Twitter page, Sumbal also called for boycotting products from “Apartheid Israel… for killing babies in #?Gaza.” He retweeted something last July 24th that reads “#Jews of de world, show us a lil of your much-vaunted intelligence and get rid of #?Zionist terrorists!” And he tweeted one of his own on July 31st of a dead child that reads, in part, “This is #Jewish #?UglyfaceofIsrael.”

For all of Sumbal’s expertise as a journalist, he apparently doesn’t know that it’s not only Jews who serve in the IDF, but also many Arab Israelis and Druze citizens. (In fact, Israel’s famous Golani Brigade has a Druze commander, Col. Ghassan Alian, as its chief. During the Israel-Hamas war last summer, he was injured in battle but insisted his doctors let him go back to the front because “I have many soldiers there. I need to return.”)

I spent ten weeks in Pakistan after 9-11 probing terrorists (for Fortune magazine and CNN). I met some wonderful Pakistani reporters, but, for the most part (not always), I didn’t volunteer the fact that I’m Jewish. And colleagues told me that this was smart thinking. One only needs to read the Pakistani press to find myriad examples of anti-Semitism. It can also be found in their high school textbooks. One night, from Islamabad, I tried to telephone a cousin in Israel. But a recorded voice from an operator told me in English that the country code I dialed [972] “does not exist.”

A moment ago, I went back to Sumbal’s Twitter page. Lo and behold, the Hitler tweet “does not exist” any longer. But, Sumbal, you may want to delete the other tweets, too. Just use “Jew” as a search term, and you’ll find them quickly enough.

[POSTSCRIPT: Thanks, Ruth Collins, for finding another gem. In this case, a tweet from Sumbal last August reading: “Jews are not as peaceful as you are trying to present them, unfortunately.”]

First posted by Richard on Facebook at this link. 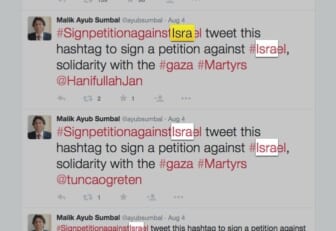 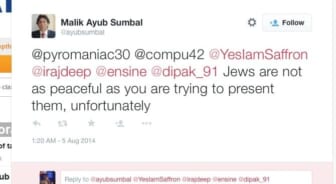 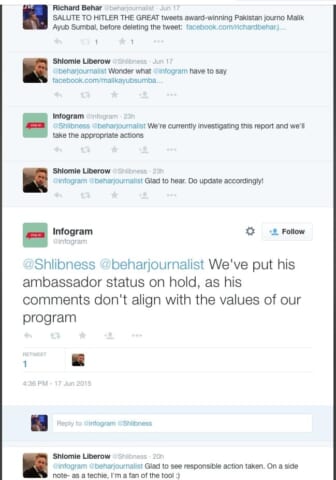