On Sept 24th, 1922, the New York Times featured an article on Palestine as a land of promise. It describes the positive impact of the Jewish pioneers on the land and economy, an impact also felt by the Arabs living there (even though they did not trust the Jews). The Jews are said to be cultivating an arid land, raising the standard of living for all inhabitants.

Clearly not the narrative the haters would have you believe – that we somehow came and plundered the land.

Also of particular note: the reverence with which the Jews hold the land, despite having limited access to Jewish holy places (even paying money to “insert a hand” into the supposed location of the Cave of Machpelah – yes, the “custodians” charged Jews for the benefit). There is also an acknowledgment that the Jewish holy places were there first, being subsequently taken over by other religions. Because back then, they admitted we were the indigenous people of the Holy land. 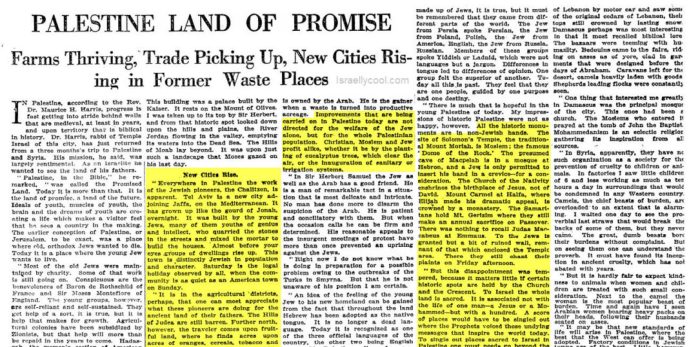