Home Aussie Dave “The Beauty of Judaism” According to Linda Sarsour

Linda Sarsour has shared a “Rabbinic” letter in support of Professor Michelle Alexander, who penned a letter in the NY Times using Martin Luther King Day as an opportunity to bludgeon Israel. 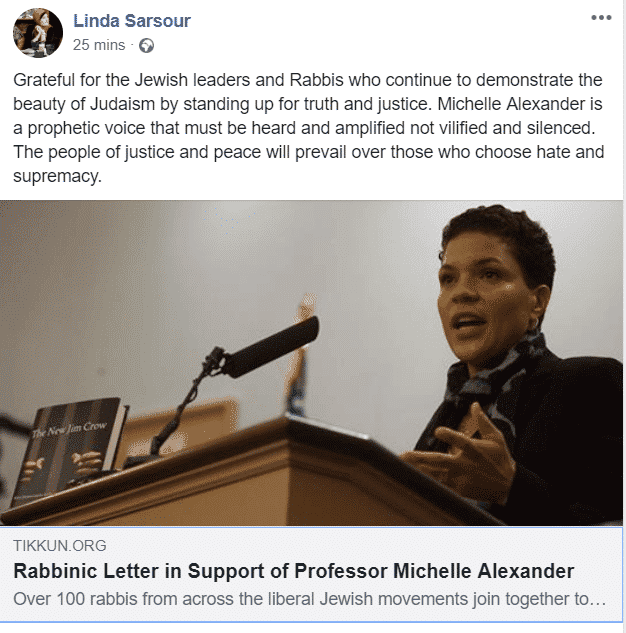 Grateful for the Jewish leaders and Rabbis who continue to demonstrate the beauty of Judaism by standing up for truth and justice. Michelle Alexander is a prophetic voice that must be heard and amplified not vilified and silenced. The people of justice and peace will prevail over those who choose hate and supremacy.

It seems according to Sarsour, “the beauty of Judaism” is best represented by a letter written by liberal Rabbis bashing Israel, with this cherry-picked quote from the Talmud:

This is the same Judaism in which Zionism is a central tenet. I don’t suppose Sarsour would be including this under the “beauty of Judaism”:

“And the Lord spoke unto Moses in the plains of Moab by the Jordan at Jericho, saying: Speak unto the children of Israel, and say unto them: When ye pass over the Jordan into the land of Canaan, Then ye shall drive out all the inhabitants of the land from before you, and destroy all their figured stones, and destroy all their molten images, and demolish all their high places. And ye shall drive out the inhabitants of the land, and dwell therein; for unto you have I given the land to possess it.” (Numbers 33:50-53)

And if we are referring to the Talmud, how about the numerous laws (including entire tractates) dealing with living in the land of Israel, such as the festivals revolving around the agricultural seasons here, and the Shmitah (Sabbatical) year. Or quotes like this:

Said the Holy One, Blessed be He: A small group in the land of Israel is more beloved by Me than the Great Sanhedrin outside of Israel. [Yerushalmi, Nedarim 80:6, 5:8]

You get my drift.

Going back to the cherry-picked quote in the “Rabbinic” letter, the “sins of his household” and “transgressions of the people of his community” would most certainly include doing exactly what these Israel-bashers are doing – denying the Jewish right to the land of Israel and speaking ill of Jews who live in their homeland and protect themselves against those trying to murder them. And if we are to be completely honest, it would also include things like desecrating the Shabbat and changing the laws of Judaism like these “Rabbis” almost certainly do.

Sarsour’s post is the equivalent of me posting a distortion of Islam, including a cherry-picked quote to support the distortion, and referring to it as the “beauty of Islam.” I am sure Muslims would find that highly offensive, just as I find this from Sarsour.

Linda Sarsour seems to think she can continue to bash proud Jews who support a central belief of Judaism (i.e. Zionism), as long as “some of best friends” who are Jewish do the same. That does not make her any less antisemitic.