The haters (like Linda Sarsour) are out in full force with the latest palestinian “sob story” – those nefarious Jews have gone and evicted a palestinian family from their home in the Muslim Quarter of Jerusalem’s Old City. Just for shits’n’giggles it would seem. 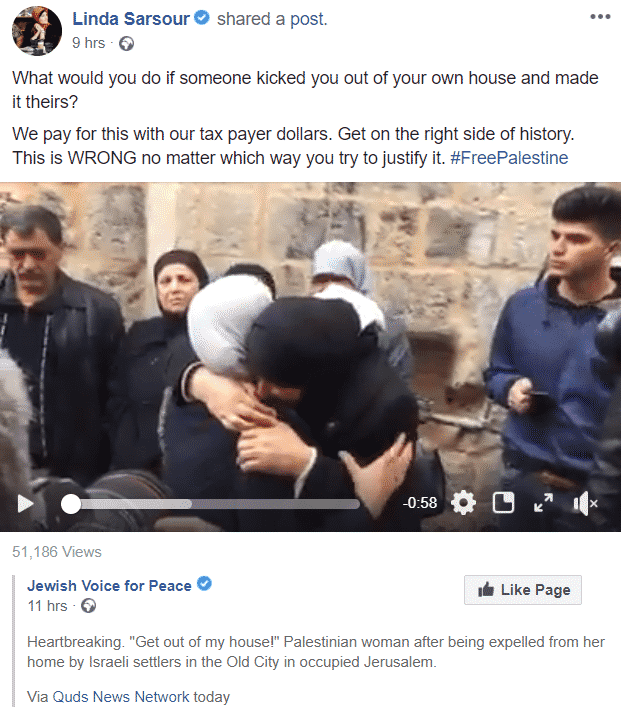 Naturally, the truth is something else – even in heavily-slanted-against-Israel reports:

Israeli police on Sunday evicted a Palestinian family from their home in the Muslim Quarter of Jerusalem’s Old City, after the supreme court ruled Jewish claimants were the rightful owners.

An AFP photographer said residents of the neighbourhood in Israeli-annexed east Jerusalem scuffled with police, who stood guard as about a dozen Israeli settlers took possession of the large building.

“They disturbed police activities,” he told AFP but could not say if they were subsequently released.

Rania Abu Asab, who lived in the house with her husband, their children and his aunt, stood weeping outside as the settlers raised the Israeli flag on the roof.

“We live there, it’s my house, it’s my whole life,” she said. “They took everything.”

She said the family was compelled to leave behind all its furniture and belongings.

Ir Amim, an Israeli watchdog group which monitors settlement activity in Jerusalem, reported on February 3 that the Abu Asab family had been served an eviction notice ordering them to vacate the property by February 12.

It said family members had lived there since the 1960s.

Israeli NGO Peace Now said the home originally belonged to a Jewish family which fled during the 1948 war which accompanied Israel’s foundation.

East Jerusalem was occupied during that conflict by Jordan until the 1967 Six-Day War, when it was seized by Israel and subsequently annexed, moves never recognised by the international community.

The Abu Asab family lived until 1948 in a neighbourhood it fled before eventually moving to the home in question.

Peace Now said in a statement Sunday that under an Israeli law passed in 1950 Palestinians cannot return to homes they fled in 1948.

A 1970 act, however, decreed that property in east Jerusalem abandoned by Jewish owners could be reclaimed.

“The court granted the settlers the house and the Abu Asab family became refugees for the second time,” Peace Now said.

Even according to Peace Now, an organization working against Israel, the Jewish family were there first, expelled by the Jordanians in a war. The Israeli Supreme Court, which can hardly be accused of automatically taking Israel’s side, ruled in the original occupants’ favor.

Why was the Arab family’s occupancy – the result of the occupation of a foreign army with no connection to the land – valid, yet the prior occupancy of Jews (who are at least the indigenous people of the land) not valid? The only way you can argue the Arab family had real rights to the house is if you recognize conquest, in which case Israel’s “conquest” (which was really a liberation) trumps the Jordanian one. Either way, it makes sense that the Jewish family be awarded back their home. Unless you are a bigot, of course.

(On a similar note, notice how the Jewish family are called “settlers”, yet the Arab family not, despite the fact the latter were there because of the Jordanian occupation).

So to answer Sarsour’s question “What would you do if someone kicked you out of your own house and made it theirs?”, the answer, in this case, is petition the Israeli Supreme Court, which the house’s rightful (Jewish) owners did.

By the way, there is another important point to consider in this report. During the War of Independence, the Arab family fled another neighborhood, and ended up in this house. They were not expelled, or forcibly driven away from Israel even after the Six Day War. Yet another ethnic cleansing fail!