The Washington Post has run an interview with Linda Sarsour, and by interview I really mean propaganda piece to turn this hateful person into a victim.

Activist Linda Sarsour, 38, was co-chair of the 2017 Women’s March and is a board member of the Women’s March national organization.

How did you get involved in the Women’s March?

I was one of those women that commented on the first Facebook page that was all white women and that had written a description: “We stand with black women.” I didn’t see in the description Muslim women. And I felt like: Really? We just came out of an election where this president made Muslims the cornerstone of his smear campaign. So I wrote, “This looks like a great endeavor. It would be great if you included Muslim women.” All of a sudden, my comment goes viral. The next day, Tamika [Mallory] calls me and says, “Listen, we’re bringing you into this so you can make sure that your people are represented.” I was like, “I don’t have it in me, people” — I was so depleted after the election. And they were, like, “Look, Linda, if you’re not at the table, what other Muslim lady, Muslim organizer are we going to find?”

Being a Muslim American activist, I’ve been targeted by the right wing in a way that is very dangerous. I’ve tried to shelter my kids. One day my daughter asked, “Mom, you think that you’ll get shot?” I was, like, Whoa. Of course, I’m like, “Nope. That’ll never happen in America.” But there’s a lot of risk.

Talk about a martyr complex. To my knowledge, she has never been threatened with physical violence. But don’t left facts stand in her way.

Does it ever make you rethink what you’re doing?

I’ve reflected on that question many times. But I always think to myself: What if I didn’t do this work anymore? It would send a message to people in my community that it’s not safe. That I have come to terms with the fact that we’re just never going to be wholly free. That this country’s just never going to accept us for who we are. And I don’t want to send that message. I haven’t given up on my country. I believe in the potential. I believe in the Constitution. I believe that this is the land of religious freedom and that that applies to Muslims. And if I have to make it apply to Muslims with the work that I do, I’m going to do that. And it’s going to require that my family and I have these hard conversations.

It is quite rich of her to speak about the US not accepting her people for who they are, given she has a very difficult time accepting others for who they are – specifically proud Jews who love their homeland. Plus she speaks about religious freedom on one hand, and wanting Sharia Law for the US on the other.

In addition to right-wing attacks, you’ve also gotten criticism from the left, with people charging that you’ve said there’s no room for Zionists in the women’s movement. …

That was actually a headline of a piece in the Nation. This is what the media does because it’s clickbait. I remember a rabbi friend of mine calls me up, like, “Linda, I can’t keep defending you.” I was, like, “What are you talking about?” She said, “There’s this thing in a Listserv I’m on, about Zionism and you can’t be feminist.” I was like, “Did you read the actual piece? It’s not my quote.” What I did say, and do stand by, is if you are a woman who claims that you are a feminist, but you don’t support access to health care for women in Palestine or access to the same opportunities we have — because that was the context of the question I was asked — then you’re not a feminist.

This is what Sarsour actually said:

When you talk about feminism you’re talking about the rights of all women and their families to live in dignity, peace, and security. It’s about giving women access to health care and other basic rights. And Israel is a country that continues to occupy territories in Palestine, has people under siege at checkpoints—we have women who have babies on checkpoints because they’re not able to get to hospitals [in time]. It just doesn’t make any sense for someone to say, “Is there room for people who support the state of Israel and do not criticize it in the movement?” There can’t be in feminism. You either stand up for the rights of all women, including Palestinians, or none. There’s just no way around it.

Sounds a lot like saying you can’t be a Zionist and a feminist, albeit in very verbose way. Plus she has been very clear about her views on Zionism. 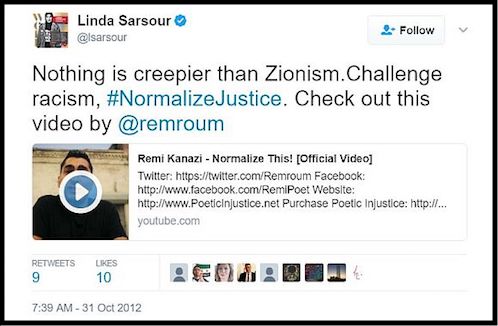 … and criticizing you and Tamika Mallory for not denouncing Louis Farrakhan.

As the Washington Times noted in December, Sarsour spoke at Justice or Else, an October 2015 event at the National Mall organized by Farrakhan marking the 20th anniversary of the Million Man March. Plus she is clearly a fan of the anti-termite.

As is her co-chair Tamika Mallory. 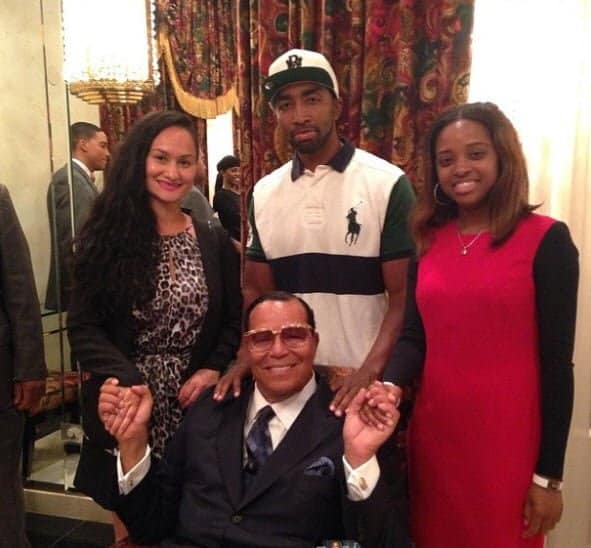 I don’t denounce people, KK. I never even denounced Trump. Because we are all trained in Kingian nonviolence. And what we’ve been taught is that you attack the forces of evil, not the people doing the evil.

Oh c’mon Linda. Now you are not even trying with your lying. 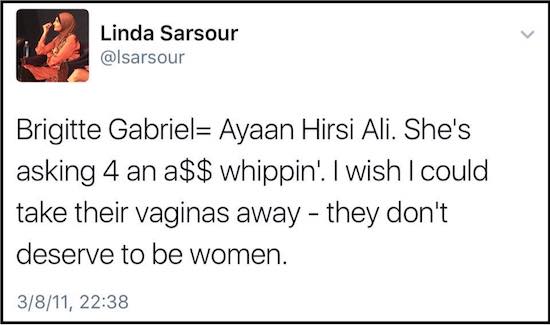 We came out and said we unequivocally reject anti-Semitism.

We reject homophobia and all that good stuff.

You have a funny way of showing it.

But for some people, anything short of a denunciation was not going to be enough.

Why not denounce antisemitism and homophobia and dissociate yourselves from proponents of them?

We have updated our unity principles to explicitly include Jewish women, we have a steering committee of about 20 women, three of whom are Jewish women, and a program that includes Jewish women.

I bet none of them are Zionists, though.

And it’s been because of the relationships and the dialogue that we have that is not public. But the media likes conflict; there isn’t the same commitment to telling the resolution of the conflict.

I am also a flawed leader. I’m going to make mistakes. I’m going to say things I may not understand have hurtful impact on people. I always call people to call me in, to educate me. And to love me enough and to see my contributions in a way that, when I become better, our country becomes better. I can call other people in and say, “I just learned something new. Want to learn with me?”

I think I just gagged a little.