A man called Bishop Talbert Swan has tweeted and posted about an upcoming event he is hosting, with Linda Sarsour being one of the featured speakers.

And clearly, there is a bit of mutual admiration society happening between Swan and Sarsour 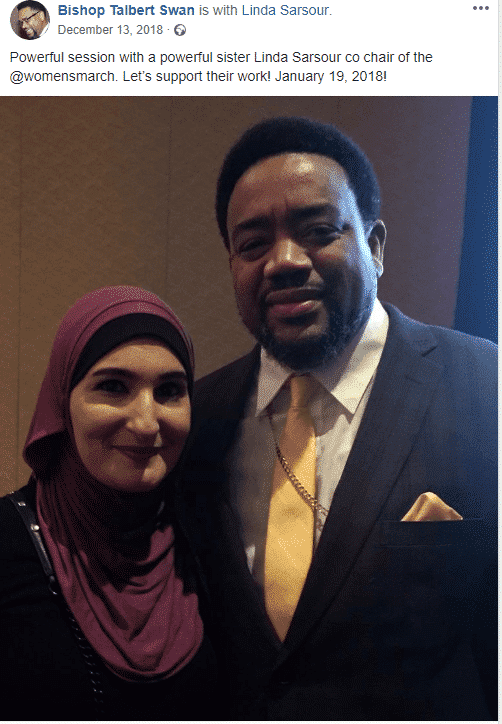 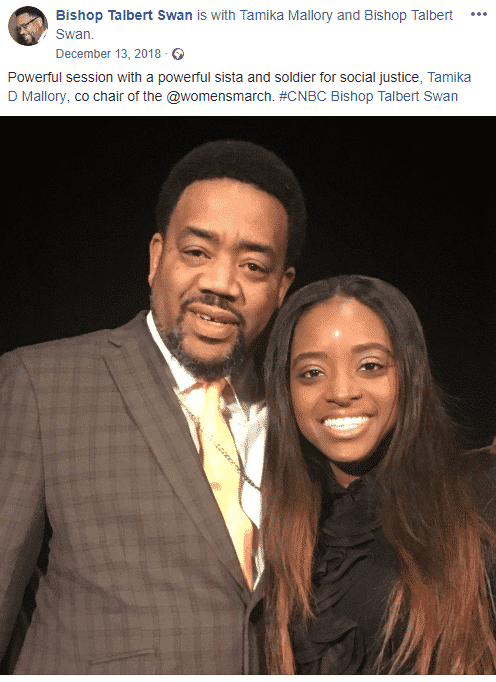 Ok, how is any of this relevant to anything, you may be asking. Glad you asked!

Swan made national headlines in 2003 by taking issue with the comparison of the fight to legalize same-sex marriage with the civil rights struggle. He is the editor of the controversial book Closing the Closet: Testimonies of Deliverance from Homosexuality, a book that details the testimonies of 23 individuals, including Darryl L. Foster and Alan Chambers, former president of Exodus International, claiming to no longer be homosexual as a result of their religious experience. Gay activist Wayne Besen criticized the book and accused Swan of taking material from his booklet, Finally Free, stating, “I am horrified that this book pilfered ‘Finally Free’ and twisted the original idea to support ex-gay propaganda.” Swan, responding to Besen’s criticism, noted “First, I never even heard of his work ‘Finally Free’ until I read his obviously angry critique of ‘Closing the Closet’, therefore, how could I have ‘pilfered and twisted’ something I have never read nor ever knew existed?”

According to Sam Brownback, former U.S. Senator and Governor of Kansas, Swan is among a growing number of African American leaders speaking out and “working to prevent promoters of same-sex marriage from hijacking the civil rights movement.” Peter Sprigg, author and Senior Fellow for Policy Studies at the Family Research Council quoted Swan as stating that homosexuals will never face the kind of profiling African Americans face. Swan has opposed the comparison between the civil rights movement and the fight to legalize same-sex marriage noting that blacks were lynched, denied property rights, and declared inhuman.Even after the Supreme Court ruling in Obergefell v. Hodges legalized same sex marriage across the United States, Swan held that the history of enslavement of African-Americans could not be compared to gay struggles.

Here is the table of contents of his book Closing the Closet:

While the book is from 2004, I do not see any evidence of Bishop Swan forsaking these views since then. Although I suspect he’s still not a huge fan.

Interestingly (or tellingly) enough, Sarsour has not posted about the event on her Facebook page. Could it be that she does not want people to see that she is willing to associate and collaborate with someone who has edited a book on “deliverance” for homosexuals, while claiming to be for LGBTQ rights?

This is yet another example of Sarsour’s rank hypocrisy and faux feminism, and to an extent, within the Women’s March, especially when it comes to her good friend Tamika Mallory.