The Palestinian Revolutionary United Front Facebook page, headed by “Angel in a Hummer” Rena Salomon, regularly peddles in libels of the Jewish state.

Their latest is this one: 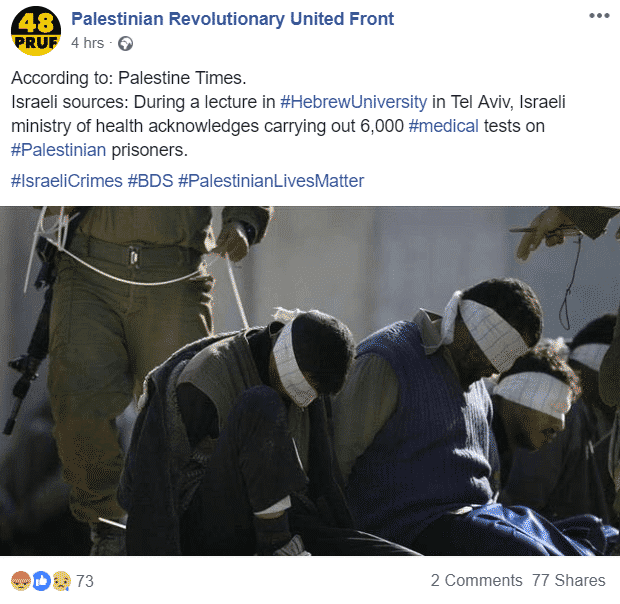 You know instantly this post is light on facts when you see the words “#HebrewUniversity in Tel Aviv”; anyone with a modicum of knowledge knows Hebrew University is in Jerusalem.

But that’s not the big lie. That would be the claim of the post that the “Israeli ministry of health acknowledges carrying out 6,000 #medical tests on #Palestinian prisoners.”

This never happened – there is absolutely no record of Israel’s Ministry of Health ever admitting to such a thing. Because it never happened.

But you need to read the actual report to see what is going on here.

For a start, these are the views of one, seemingly unhinged professor, not Hebrew University, and certainly not the Israeli Ministry of Health.

The Hebrew University of Jerusalem on Sunday distanced itself from claims made by a professor in its employ that Israel is experimenting on Palestinian children with new weapons systems, in order to help boost its international weapons sales.

Nadera Shalhoub-Kevorkian, a professor of social work and law at the university, has given a number of talks recently, citing accounts of East Jerusalem children reporting being used as guinea pigs for weapons.

“The views expressed by Prof. Nadera Shalhoub-Kevorkian don’t represent or express in any way the views of the Hebrew University or the university administration, but are her personal opinion that reflect only her views,” the university said in a statement Sunday.

And how did she arrive at these views? By observing it? By interviewing IDF soldiers involved in such nefarious activities?

Nope! Just by accepted as fact these libelous allegations from palestinian children.

“They check what bombs to use,” Shalhoub-Kevorkian quoted a child named Mohammed saying, whether “gas bombs or stink bombs, whether to put on our heads in plastic bags or cloth bags, whether to hit us with their rifles or kick us with boots.”

She quoted another child, named Alaa, as saying “In the news, you can find a new camera that can film us at night, a new voice recorder or new rifle, and they [IDF soldiers] tried everything on us.”

Well, that settles it then.

Alternatively, Rena Salomon, with her track record in Jew hatred, is really only interested in demonizing the Jewish state.