Fresh from their last libel (which they quietly deleted after I caught them and broadcast it) Quds News Network have posted a claim that “Settlers of Hebron” used loud speakers “to call for breaking into Al Haram Al Ibrahimi mosque to celebrate the 25th anniversary of the [Baruch Goldstein massacre].” 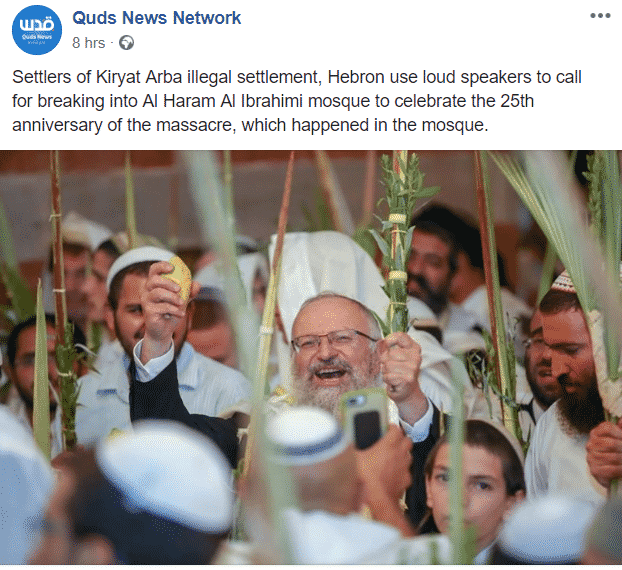 The implication is clear: the Jews of Hebron want to repeat the crime Baruch Goldstein perpetrated 25 years ago.

This is yet another outright lie. Had this actually occurred, you’d be sure the palestinian media would be all over it, not to mention anti-Israel “human rights” groups stationed in Hebron. But nothing. Nada, zip, zilch, squat, bupkis.

The falseness of their allegation is reinforced by the photo they used, which is not, as they suggest, of this alleged incident, but of Jews in prayer on the festival of Sukkot (the Feast of Tabernacles), which occurs around September or October each year in prayer.

Actually, Quds News Network did not stop there with their Hebron lies. They also claimed that Baruch Goldstein broke in to their mosque 25 years ago “under protection of” the IDF. 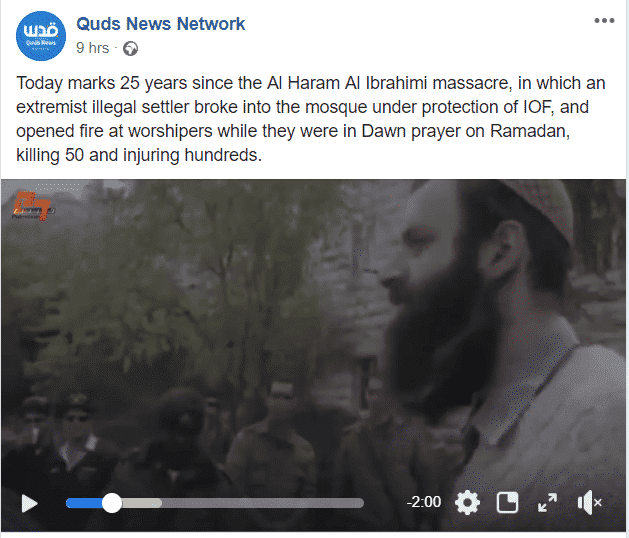 Unlike their previous libel I caught, Quds News Network will not remove this one, because there is no proof it is a lie – although I demonstrated it is using logic. And they will continue to maliciously spread these lies to demonize Jews each and every day.