Anti-Israel propaganda site Quds News Network seems to make a real habit of posting things that are not true, or that show something that actually undermines the point they are trying to make with the post to begin with.

The latest example is this: 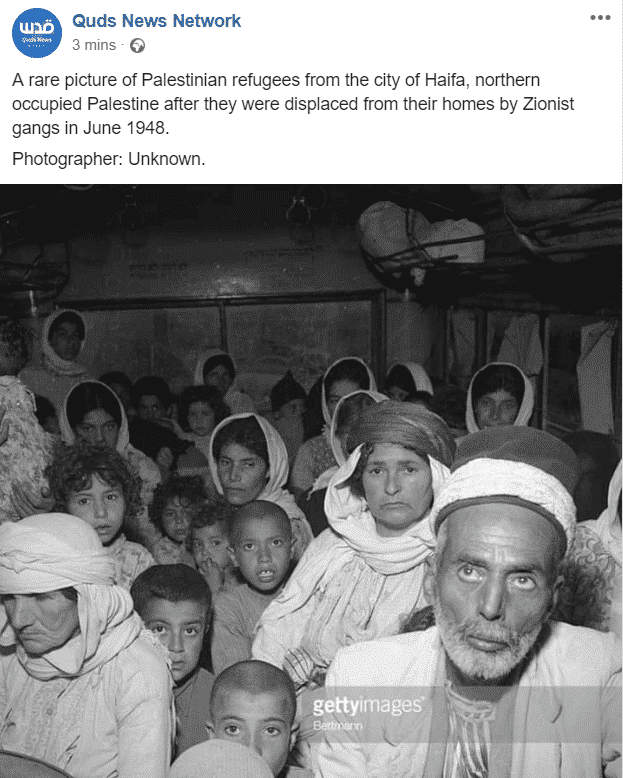 A reverse image search reveals the source of the photo, including its caption:

Arab Refugees
(Original Caption) Arabs, mostly old men, women and children, stare in stoney silence at the camera. They were among more than 1500 Arab refugees from captured villages who were given safe conduct from a non-combatant town near Haifa, where food and and quarters could not be provided for them, to the Arab lines in Tulkarim. Jewish trucks and busses brought them close to their destination.

In other words, the photo is showing an example of Jewish soldiers treating Arabs displaced by the War of Independence kindly – flying in the face of the palestinian narrative that never acknowledges this, but rather paints us as relentless murderers and ethnic cleansers.

By the way, I have posted about the fleeing Arabs of Haifa before, based on a Time Magazine article of the time – many fled “partly by fear, partly by orders of the Arab leaders.”

So thank you Quds News Network for providing us with the opportunity to learn about this!