Our “peace partners” are at it again. 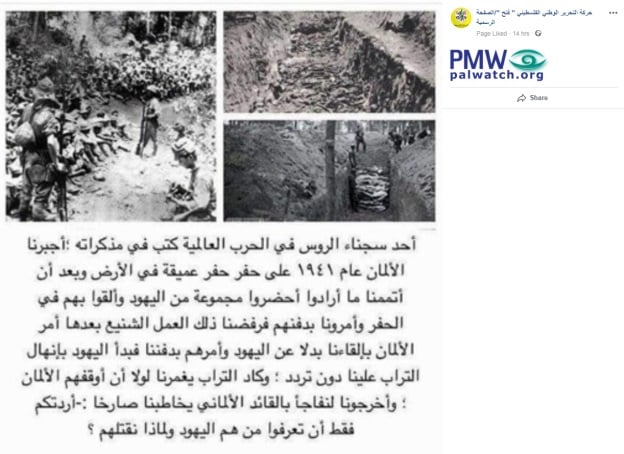 On Facebook, Fatah posted the three photos above from World War II together with a story it presented as authentic. According to the version posted by Fatah, Jews willingly and eagerly agreed to bury Russian civilians alive in order to save their own lives. Seeing this, a Nazi soldier proclaimed to the Russians:

Fatah presented the story as an authentic quote from the purported memoirs of a Russian civilian:

“One of the Russian prisoners in World War II wrote in his memoirs: ‘In 1941 the Germans made us dig deep pits in the ground. When we finished doing what they wanted, they brought a group of Jews, threw them into the pits, and ordered us to bury them. We refused to carry out this atrocious act. So the Germans ordered to throw us in instead of the Jews, and ordered them to bury us. The Jews began to pour dirt on us without hesitation. The dirt almost covered us, but the Germans stopped them and took us out. We were surprised when the German commander shouted at us: “I just wanted you to know who the Jews are and why we are killing them!“‘”
[Official Fatah Facebook page, Feb. 27, 2019]

Fatah chose to post the text without comment. It did not condemn this story for portraying Jews as evil, selfish, and ungrateful. Nor did it distance itself from the Nazi commander’s justification of the murder of Jews in the Holocaust based on the antisemitic libel that Jews are defined by these character traits.

Fatah’s antisemitic story justifying the murder of Jews in the Holocaust does bear some similarities to a historical account documented by a JTA news release on Nov. 27, 1942. However, in reality, Jews and Ukrainians all acted heroically by refusing to bury each other alive, and therefore were all murdered by the Nazis.

This sounds like something PA President and Fatah Chairman Mahmoud Abbas could have written himself.

In other news, there are those who would like you to believe this is just a territorial dispute, and has nothing to do with palestinian Arab hatred of Jews.