I guess it was inevitable, but it makes it no less infuriating: Palestinian Arabs and other Israel haters have tried to connect the horrendous mosque massacres in New Zealand to Israel and the Jewish people.

Exhibit A: Accuse Israel of having actually perpetrated the massacre

Exhibit B: Compare the IDF to the mosque massacre perpetrators 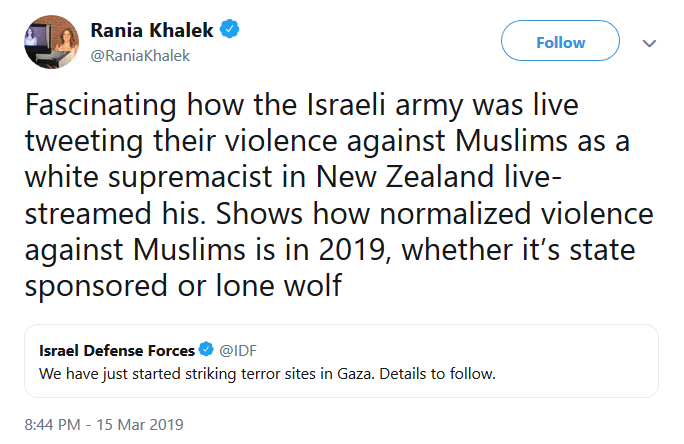 Exhibit C: Mention that one time, 25 years ago, a Jewish man perpetrated a mosque massacre (which was condemned by 99.99% of his fellow Jews)

Exhibit D: Blame the massacre on those who have spoken out against antisemitism.

The account this video originated on has since been deleted.

While these haters and others have been doing their thing, Israel and Jews worldwide have been offering their condolences and support.

Israel mourns the wanton murder of innocent worshippers in Christchurch and condemns the brazen act of terror in New Zealand. Israel sends its condolences to the bereaved families and its heartfelt wishes for a speedy recovery to the wounded

Statement from the New Zealand Jewish Council on today’s attacks in Christchurch.
On a personal note, I am heartbroken for the Muslim community, for Christchurch, and in fact for all of us Kiwis. pic.twitter.com/NAEUFsc1GD

I've been called Islamophobic by more antisemites and #Israel haters I care to count (all b/c I speak against palestinian and Islamic terrorists). Yet I would be first to volunteer to do security detail for a mosque genuinely afraid of being attacked. And I am sure I am not alone

It does not matter that there is no reciprocity when there are terror attacks against Jews and Israelis – right is right, and the murder of innocent people is abhorrent.