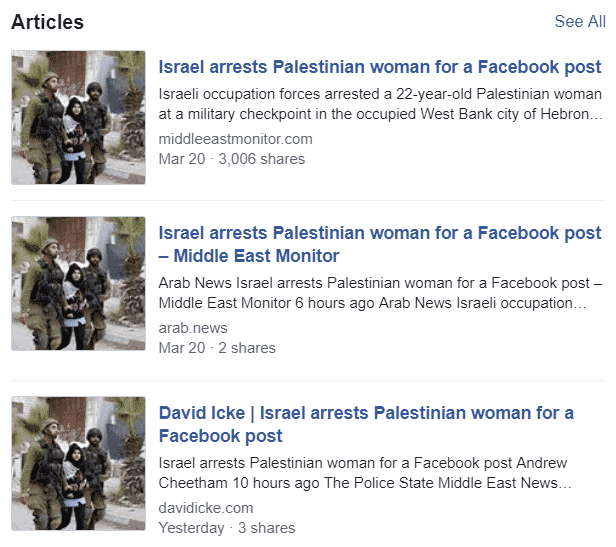 This is the story according to Middle East Monitor (MEMO):

Israeli occupation forces arrested a 22-year-old Palestinian woman at a military checkpoint in the occupied West Bank city of Hebron after she posted a comment on Facebook on Al-Aqsa Mosque.

Isra’a Hammad Abu Sneineh was detained at the Abu Al-Rish military checkpoint near the Ibrahimi Mosque in Hebron.

According to the Asra Media Office, Abu Sneineh was arrested at the military checkpoint located at the main entrance to the Old City, west of the Ibrahimi Mosque, as a result of a Facebook post she wrote about Al-Aqsa Mosque.

The report includes this photo and caption:

All the other reports making the claim include the same photo.

Except this photo has been around at least as early as 2015. So it clearly cannot be what is now just claimed.

An Israeli army force on Saturday arrested a girl near the Ibrahimi Mosque in the West Bank city of Hebron.

The spokeswoman of the Israeli police, Luba Al-Simri, on Saturday, that the girl approached the Israeli soldiers at a barricade in the vicinity of the mosque, with a knife.

She claimed that Israeli soldiers managed to arrest her without opening fire or using force.

Interestingly enough, both the recent report and this 2017 report mention she was arrested near the Ibrahimi Mosque in Hebron. Which means what probably happened is MEMO and others took the earlier report and maliciously changed it.