We already knew that those anti-Israel ‘activists’ of IfNotNow had not been blessed with much of the grey matter. But it helps to be reminded from time to time.

Birthright Arrests 15 Students from Around the Country: More than 200 Jewish students and other young Jews blocked the doors to Birthright Headquarters for 2 hourshttps://t.co/XKMr7osOZ2 pic.twitter.com/OP3JJNTNZY

Birthright did not arrest anyone – that would be the NYPD.

Also, if you are going to complain about being arrested, probably best not to reveal that you did something that actually merited being arrested.

This morning, Birthright arrested 15 Jewish students as around 200 of young American Jews gathered outside of Birthright Headquarters, blocking both 3rd avenue and the doors to the office building for about two hours during rush hour.

According to the protesters, Birthright’s choice to arrest the students rather than engage is a reflection of how they regularly prioritize their donors’ pro-Occupation agenda, and alienate an entire generation of American Jews.

Again, birthright did not arrest anyone – that would be the NYPD. But crying they did not want to engage? That’s rich coming from IfNotNow.

Yup, not the sharpest tools in the shed. 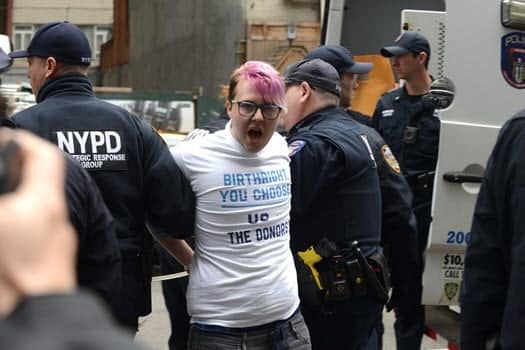 But they are tools.