A few days ago, a number of palestinian sites, like WAFA, Quds News Network, and IMEMC, reported the murder of a young palestinian child in Belgium.

The Palestinian Ministry of Foreign and Expatriates Affairs said in a statement yesterday that it was carefully following up with competent Belgian and Lebanese authorities on the murder crime of Palestinian-Lebanese child Daniel Al-Alali in Belgium.

Official Palestinian news agency Wafa said Palestinian Minister of Foreign Affairs Riyad Al-Malki issued orders to the Palestinian embassy in Belgium to cooperate with Belgian authorities to exert every possible effort to uncover the details behind the mysterious death, as well as to offer necessary help to the child’s family, added the statement.

About five months after the nine-year-old child arrived with his mother in France coming from Lebanon, where his family had lived, Daniel was reportedly kidnapped by unknown assailants, and was found killed and buried in a refugee center a few days later.

Ahmad, Daniel’s uncle, told the Lebanon-based An-Nahar daily that at first, his brother Mahmoud, Daniel’s father, had received a phone call from Belgian police to the effect that Daniel’s bike had been found but with no clues about the child’s whereabouts. The other day, Ahmad continued, Daniel was found dead but his uncles who rushed from Germany to Belgium were not allowed to see his body by Belgian authorities.

Ever since, the police arrested five suspects into the child’s death for investigation amid unconfirmed reports saying the child was killed by a gang of five culprits.

Note the date of the report – April 26th. This is relevant because already by then, the nationality of the culprits was absolutely known. Even Lebanon’s Daily Star revealed it.

Yet these sites deliberately did not report this pertinent fact. Heck, QNN’s Facebook page even kept this comment up: 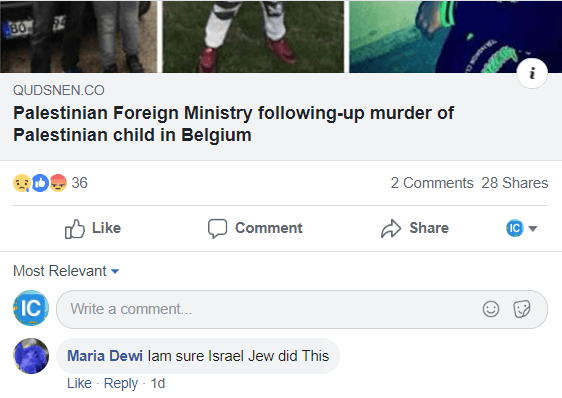 Because in their world, palestinians can do no wrong – unless the are collaborating with Israelis – and all their ills have to be the result of the Jews.