IfNotNow, Then At Least Not on a Jewish Holiday

Those crazy Israel-hating kids of IfNotNow staged a sit-in at Berkeley Hillel on Friday. Which may have seemed like a good idea at the time, except for one important detail.

On Friday, a group of Jewish American students associated with the IfNotNow movement staged a sit-in at Berkeley Hillel, asking it to break ties with the Birthright Israel program.

The students with IfNotNow were protesting the issues around Birthright trips not addressing the occupation occurring in Palestine as well as questioning the motivations and sponsorship of the program as a whole.

“We’re IfNotNow, a movement of young American Jews working to end the community’s support for the occupation,” said campus junior and IfNotNow member Iris Morrell. “We believe the occupation is a humanitarian crisis and a moral disaster.”

Berkeley Hillel could not be reached for comment as of press time due to members observing the holiday Yom Tov. 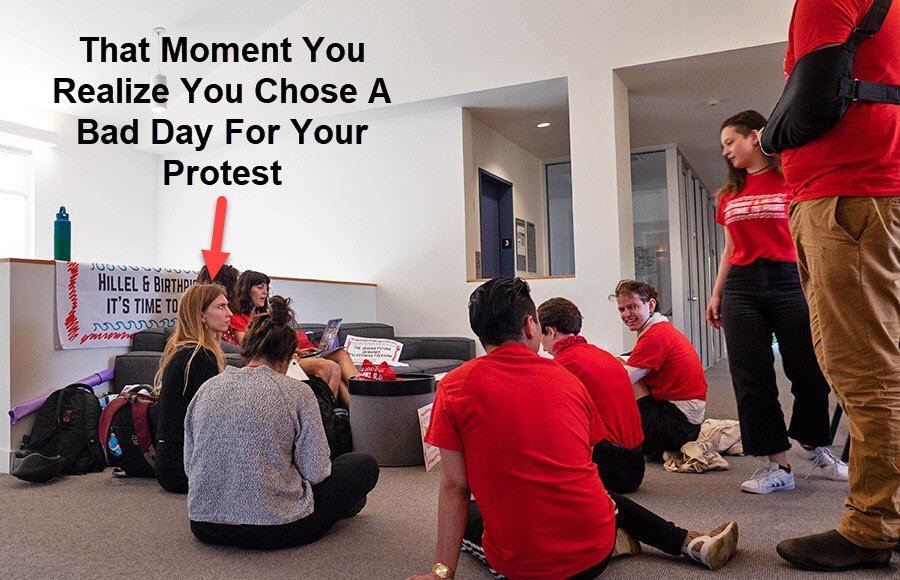 A few weeks before the sit-in took place, IfNotNow members went to Berkeley Hillel and asked them to meet a few demands, including marking the West Bank on maps, featuring a checkpoint from a Palestinian perspective on trips to Israel and acknowledging that the occupation is a humanitarian crisis, according to Morrell. Berkeley Hillel did not respond to the demands.

The IfNotNow members at the sit-in were campus undergraduate and graduate students as well as a student from San Francisco State University. At the height of the the sit-in, there were 10 students present, including an additional member who was livestreaming the event.

“I think that we all come together from different walks of life,” said campus sophomore and IfNotNow member Ella Parker. “Bound together by a common thread of frustration … disillusioned by the institutions that raised us and the institutions that made it seem like there’s one way for you to live out your Jewish adulthood.”

IfNotNow members entered Berkeley Hillel about 10 a.m. and made their way to the upper floor of the building, where they settled onto couches and floors. The members sang and chanted in Hebrew, wore bright red shirts displaying the message “Birthright and Hillel: It’s time to part” and carried posters before sitting in a study space on the top floor.

But after occupying Berkeley Hillel for longer than an hour, there had not been a response from the staff or administration there as very few people were in the building because of Yom Tov, a holy day on which no work is done or technology is used.

According to Morrell, a group of about 200 students from universities across the country, including five UC Berkeley students, went to the Birthright headquarters earlier this month in New York City and blocked the entrance to the building. Birthright refused to meet with them and called the police. Morrell and 14 other students were arrested and detained.

“We want to create a new Jewish community that invites everyone, no matter what your politics are,” Morrell said. “We want Hillel on our side — that’s why we’re here.”

This is what happens when your idea of creating “a new Jewish community” is one that has no respect for actual Jewish morals, values, and practices.

Not that I would expect these jokers to have known that Friday was one of the last, festival days of Passover. Because to them, Passover is just another opportunity to co-opt Jewish tradition for their nefarious purposes.

IfNotNow are as Jewish as a ham sandwich – except ham sandwiches don’t try to undermine Jews’ connection to their indigenous homeland.