Two years ago, I was a student at Hebrew University on my way to my Ulpan class (Hebrew lesson) when the siren went off.

Every year at 10AM on Holocaust Remembrance Day, a siren sounds so that people could have a moment of silence for the 6 million Jews who were massacred in the Holocaust. Since it is a Jewish state, it makes sense that we would commemorate the biggest most systematic extermination of our people in recorded history and pay our respects to those who died just because they were Jewish. To me, it reminds me of why we need Israel, a safe haven to ensure this kind of thing never happens again, or if it did, Jews would have somewhere to go.

I wanted my friends from abroad to know what happens in Israel and how we pay our respects in the Jewish State for the six million Jewish victims of the Holocaust, so I bowed my head in silence while mindlessly moving my cellphone camera around to catch what I see. I was hoping to see everyone stopping what they were doing to pay their respects, but instead, I saw this: 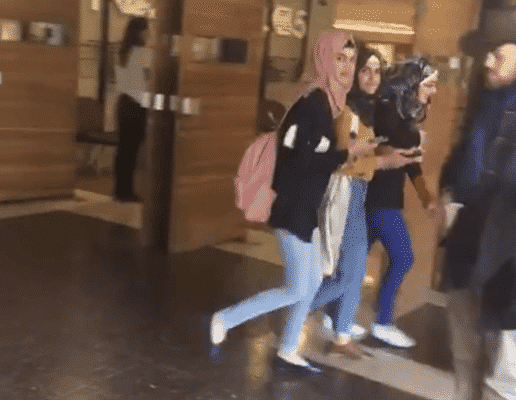 When the siren sounded, Jews stopped to pay their respects, and some Arabs continued walking and talking animatedly, or sitting down, which is the ultimate show of disrespect.

Yesterday, I saw other posts about this same phenomenon, including this one, which translates as:

At Yad VaShem, on Holocaust Remembrance Day, Arab Israeli tour guides are telling unsuspecting tourists that what Hitler did to the Jews, the Jews are now doing to the Palestinians.

Rabbi Uri Pillichowski noticed that not a single Palestinian car stopped on the highway while the Jewish cars all stopped. How could we make peace with a people like this, he asked. He suggests that the reason for this phenomenon is Holocaust denial taught in Palestinian schools.

The comments poured in from people who witnessed the same thing:

I was standing next to Derech Chevron and a truck with two Arabs kept honking and honking at the car in front of it because the driver has stopped for the siren.
The Arab-Israeli conflict has nothing to do with settlements and everything to do with antisemitism

From a People who venerate hitler, even naming clothing stores after him, what did you expect?

Arabs started piping in to defend themselves. They made claims that we deeply exaggerated the number of casualties and that this tragedy has been used against them to justify the founding of the state of Israel and their subsequent displacement.

Gee, I don’t know, maybe because the Nakba involved loss of life due to a war your people started, whereas the Holocaust was completely unprovoked and involved 6 million Jews being massacred for no reason? (Did not blur the names because they were on viral public posts). 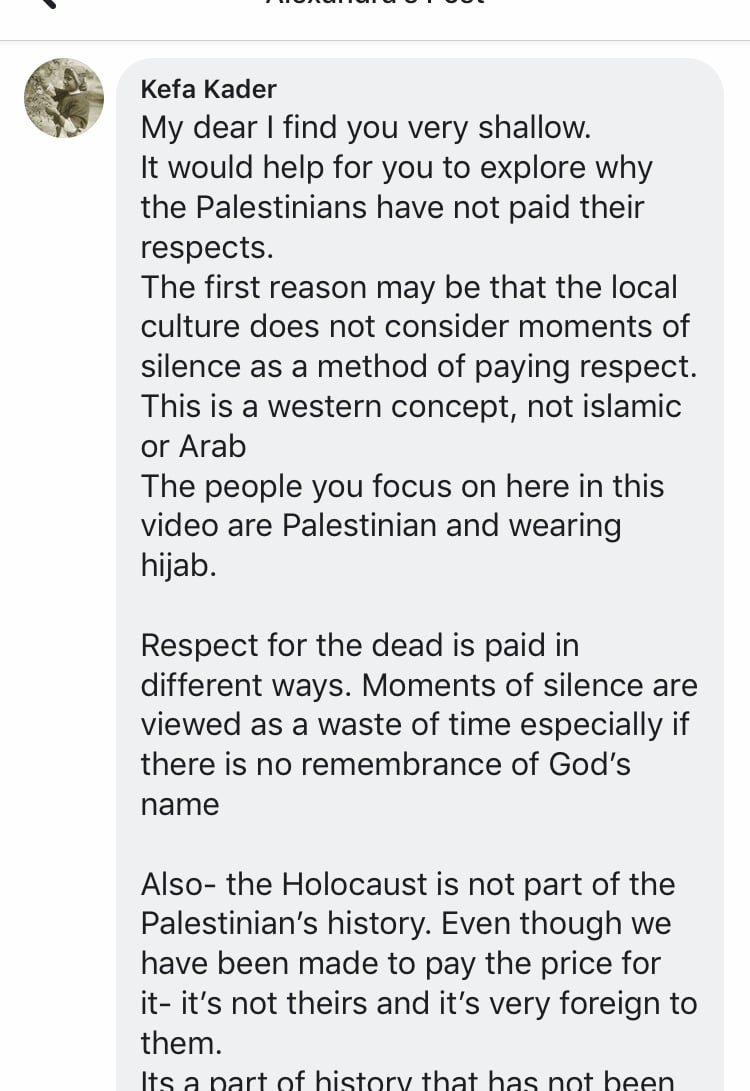 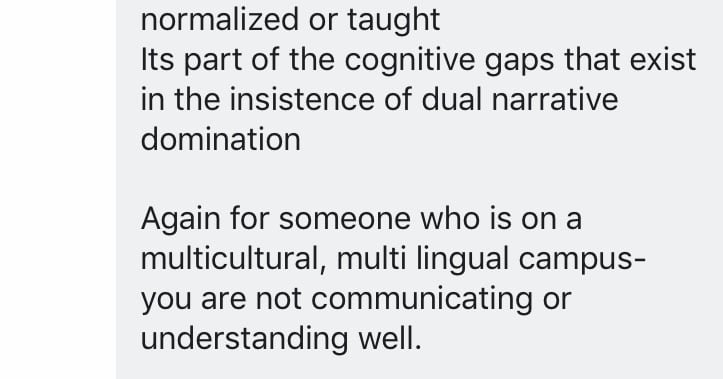 When I first saw that comment on my post I thought it was a compelling argument. On the one hand, she is tacitly acknowledging that Holocaust denial is practically universal in Arab schools. But on the other hand, she is saying that it is not their culture, so they didn’t know what to do.

My BS detector went off.

First of all, every Arab I saw showed disrespect. There is no way all of those Arabs were freshmen. If they had been in Israel long enough to at least be a sophomore (second year) they would definitely be aware. Moreover, even if it is not part of their culture, the least they could do is show respect for their host culture and commemorate a genocide that was not at their expense. The same way that, for example, if I were invited to an Arab’s house for dinner, I would abide by Arab cultural norms and manners as a sign of respect (for example, in many cases I would have to take off my shoes). They should be respecting the host culture that is giving them free or reduced tuition, and practicing an absurd amount of affirmative action to get them there. Biting the hand that feeds them is bad form.

I soon discovered that the author of the above comment was engaging in taqqiya, the practice of making things up to maintain the honor of one’s culture or religion – meaning hiding the more unsavory aspects and telling people what they want to hear in order to save face. The Arabs absolutely knew what to do, and moments of silence were indeed part of their culture: 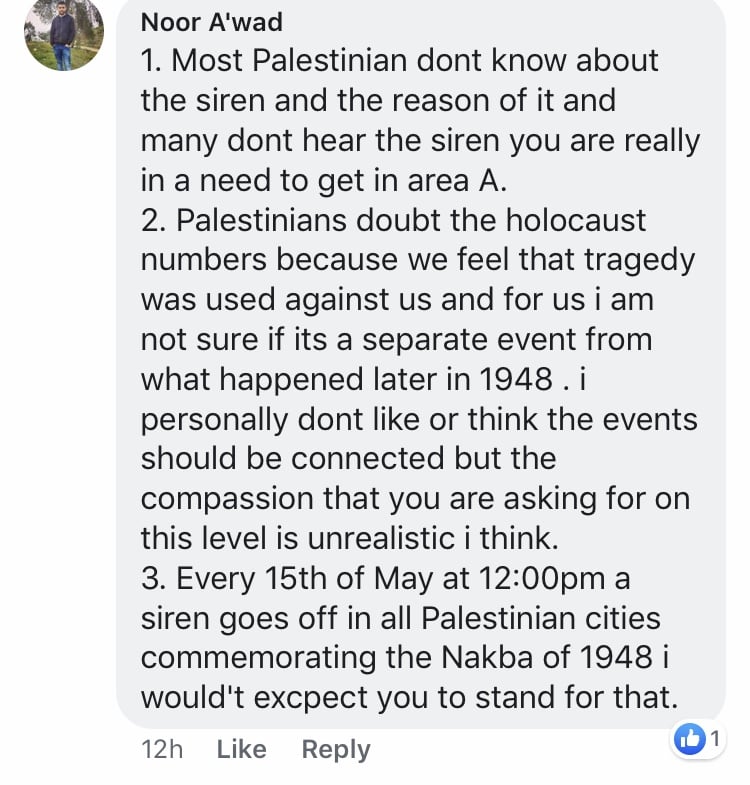 She starts off with the “they don’t know better” nonsense. Yom HaShoah is on every academic calendar. Even if they don’t read the academic calendar, which I assume they would in order to know when they get time off, one simply can’t spend a lengthy amount of time in Israel without knowing what Yom HaShoah is. In fact, the video I had posted documented my first ever Yom HaShoah experience and I figured out pretty quickly what I was supposed to do.

The most telling part of this last comment, found on Rabbi Pillichowski’s post, is that it directly contradicts the post on my video that claims that memorial sirens and moments of silence aren’t an Arab thing. Indeed, she mentions that on “Nakba Day” (in other words, the day after Israel’s Independence Day, which they call “the catastrophe”), there is also a siren, and everyone in Area A stops what they’re doing and takes a moment of silence for the Arab casualties in the war that they started and lost.

So clearly, these Arabs should have known what to do when they heard the siren, and the idea that they don’t is a bold-faced lie.

The only explanation I could give that may give them the benefit of the doubt is that they may have thought it was Yom HaZikaron, a day to mourn the dead from Israel’s many wars against their people, which we trounced. It may be confusing because it takes place next week. I understand fully that they wouldn’t want to stand for Yom HaZikaron, and I don’t blame them. But again, Arabs who have lived in Israel for more than a year should be aware of the difference by then. Especially with all the booths around campus where you can light a candle for a Holocaust survivor (I manned that both last year, and Arabs refused to light those candles as well, even after we explained what they were for), all the pamphlets going around in many different languages, and all the events associated with Holocaust Remembrance, like the myriad Zikaron BaSalon events (Roughly translated to Memory in the Living Room, where Holocaust survivors share their stories in the living rooms of people’s houses to captive audiences of young people).

Sure, maybe a minority of Arabs didn’t know any better, but the truth is clear as day: Arab schools teach Holocaust denial, and that the Holocaust myth was exploited at their expense to build a Jewish state. This premise is undoubtedly antisemitic, as the Holocaust had nothing to do with Palestinians, except for the ones who collaborated with Hitler.

Not stopping for Yom HaZikaron for fallen Israeli soldiers is not antisemitic, it’s equivalent to me not giving a moment of silence for the Nakba.

But not stopping for Holocaust Remembrance Day is antisemitic, plain and simple. The mass extermination of Jews in Europe was not at the expense of Arabs, it had nothing to do with them. As such, unless the Arabs were upset there weren’t more dead Jews, they have no reason not to pay their respects.

People who deny the genocide of my people and do the equivalent of giving us the finger during our moment of silence, are not peace partners. When events like these happen, my hope for peace dwindles by the day.