TO MADONNA.. MESSAGE FROM A MOTHER TO A MOTHER

Ms. Madonna
You certainly do not know me, but you know my son Yasser Murtaja, and you certainly heard about him in the news. Maybe you did not believe the story, till today I do not believe it too although a year passed since he was killed in a heartless and inhumane way.

My son was a photographer who dreamed of flying with his dreams away, like a bird, carrying his camera to document the Israeli violations against unarmed civilians in the Gaza Strip.

He used his camera in three wars, in which Israel crushed Gaza for ten years. He had the scoop to depict the destruction, to lift the children out of the rubble, and to help the wounded and the orphans, for he had so affectionate and compassionate heart.

On Friday afternoon, April 7, 2018, Yasser, like other journalists, was carrying his camera and wearing his uniform. Israel knew full well that he was a cameraman standing there to pick up the picture. Nevertheless, its snipers shot him without mercy with an explosive bullet that penetrated his body crushing his bones and his dreams.

Have you ever heard about the explosive bullets? It is internationally prohibited bullets that penetrate the body and run through the bowels and does not come out until death is certain. This is what Israel did to my son.

I will tell you about Yasser, my eldest son, who dreamed of traveling to many countries, to show the photos he shot in exhibitions to the world. He dreamed of being a messenger of sad Gaza; his films were broadcast on famous TV channels even after his death.

You can imagine before you arrive in Israel, how can the heart of a mother feel after losing her eldest son at an early age just because Israel wanted to end his life. Imagine how this crime left behind a baby, a young wife who dreamed of being beside Yaser, and a cold house devoid of his voice and laughter.

You should read this message sent by the heart of a mother like you. You know the meaning of having a child. You know how to have a dream for which you live for, and a joy that you seek to achieve, and then this joy is killed quickly.

Yasser was a modest young man, peaceful, unarmed, carrying his camera to convey to the world the real picture of Israel on the borders of Gaza while its forces assassinate the dreams of children and young people. It killed the picture conveyed by Yasser, a picture of Palestinians demanding their rights, which were stolen by Israel.
My son simply did not want to die, he was looking for life. He loved his job, he wanted to raise his son. He loved his country, and he did not want to leave me.

Ms. Madonna, do you know why I write to you now? because you decided to sing on the scene of the murderer and call for love and peace in a country that does not know the true meaning of peace and knows only the language of murder and war. Can your songs restore my son’s right to life?

While you depict your son as an innocent press man who not only took photos but also lifted the children out of the rubble, helped the wounded and the orphans, and had cats kissing his cheek, he was, in fact, a Hamas-hole.

According to Israeli security sources, press photographer Yasser Murtaja was a Hamas operative. According to the same sources, he served for years as an officer with the rank of captain in the Hamas security services in the Gaza Strip. The same sources added, based on information that they possess, that he was an operative who was active in the security services on a daily basis and greatly assisted them in their activity. The same security sources added that in March 2015, Murtaja attempted to bring a drone from Israel to the Gaza Strip to collect preliminary intelligence before operations by the Hamas security services. Of late, Yasser Murtaja continued to work with senior Hamas internal security officials in the Gaza Strip, many of whom made condolence calls at his family’s home (Walla News website, article by Amir Bohbot, April 10, 2018).

So was his fellow Murtaja clan member Abdullah, for whom your son posted “Allah have mercy on you, commando operative, we miss your smile” 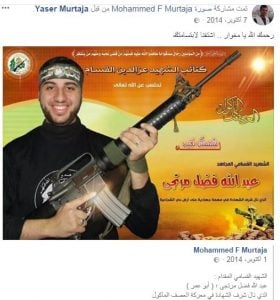 The same goes for your lies that he was documenting “unarmed civilians” – the riots he was in were anything but peaceful. As for your claim he was killed by an explosive bullet, there was absolutely no evidence of this or that Israel even uses such weapons.

So Mama, don’t preach your lies. Here’s hoping that Madonna is not touched (like 72 virgins) by your letter, and can see right through your lies.