Portuguese football star Cristiano Ronaldo has donated $1.5 million to help feed fasting people on the Gaza Strip during the Muslim holy month of Ramadan, according to reports.

The Juventus striker has reportedly given the sum to the people of Palestine as part of a long relationship between the player and the Palestinian cause, with the Portuguese star speaking out over the treatment of the Palestinian people by Israel in the past.

In 2012 Ronaldo put his European Golden Boot trophy up for auction, then donated the $1.5 million proceeds to help the construction of a number of schools in Gaza.

Thank you @Cristiano Portuguese footballer, Cristiano Ronaldo, donated US$1.5 million to the people of Palestine during the backdrop of the Muslim holy month of Ramadan.https://t.co/AUahNkMfsl

He has also shown his solidarity by refusing to swap shirts with an Israeli player after a World Cup qualifier between Portugal and Israel.

Ronaldo also met a five-year-old survivor of an attack by Israeli settlers, as he gave the young boy a specially-dedicated t-shirt.

It seems the Israel haters really, really want Ronaldo to be pro-palestinian and anti-Israel, so they keep spreading these lies.

I already posted how some of the previous gestures mentioned – the refusal to swap shirts, and auctioning his European Golden Boot and donating the proceeds to a cause supporting palestinian children – never happened.

Ronaldo did apparently meet with the young victim of the Duma fire (which we still do not know was the result of “settler” arson), but this does not mean he is anti-Israel – it means he is compassionate. Plus not long after this meeting, he starred in an Israeli advertisement. He has also joined forces with Israel’s Magen David Adom.

So even if he donated now to Gazans, you couldn’t say he was anti-Israel.

But it is almost certain he didn’t. I say this because there has been no official word on this from Ronaldo or his club.

And you’d think had he done it, there would be some pomp and ceremony. Yet the source of this rumor – which seems to be this tweet – uses an old photo of Ronaldo from 2012, around the time of the debunked Golden Boot donation rumor. 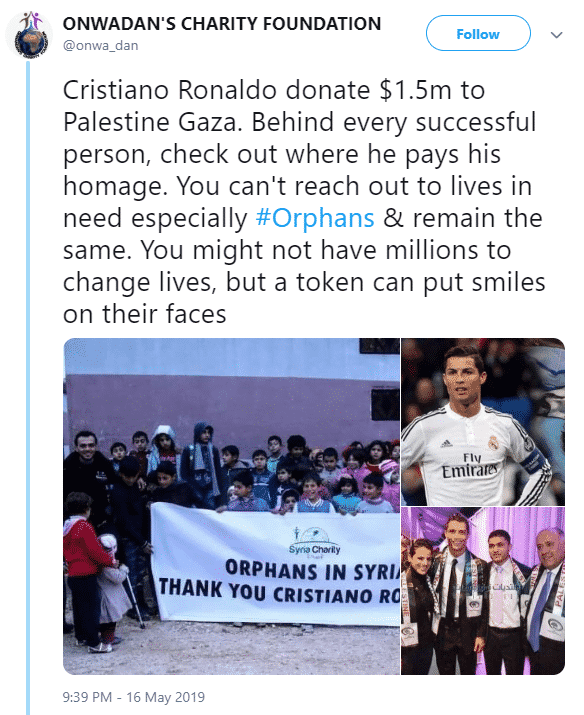 In other words, this is likely yet another fake news report about Ronaldo, supposed to show he supports the palestinians over Israel.

Meanwhile, watch as the haters use this photo to show he is pro palestinian to the point he wears their colors on his feet.

Getting ready to go dinner out with my new @Cr7Footwear Chicago green shoes!👌🏽 pic.twitter.com/vZPLrgG0VL