This banner was photographed at the recent Al Quds Days March in Toronto: 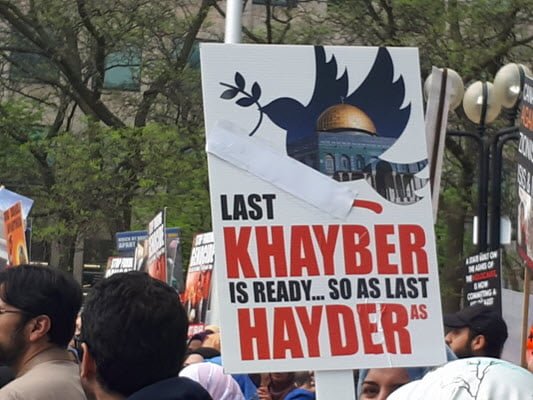 For those who don’t quite understand what this sign is saying, it refers to the ‘Battle of Khaybar’.

Khaybar – (or Khaibar) is an oasis lying about 95 miles (150 km) north of Medina (ancient Yathrib), Saudi Arabia. It included several Jewish town, the largest Jewish settlement in Saudi Arabia, conquered by Mohammed about 628 A.D. Khaybar is situated in a volcanic region covered by malarial swamps. The Jews of Khaybar were a rich community of traders as well as farmers, raising grapes, dates, vegetables and grain. They produced silk garments that were sold and known throughout the Hejaz. They manufactured metal work implements and weapons The settlements of Khaybar were concentrated around three centers – Natat, Shiqq and Katiba.

The Jewish Banu Nadir tribe of Medina, expelled from Medina about 625, moved to Khaybar. The Banu Nadir claimed to be descendants of Aaron the priest, though many of the Jews of the Arabian peninsula are thought to have been converts to Islam. Mohammed took advantage of the Hudna of Hudaibiyeh with the Meccans to turn against Khaybar. In 628 he conquered Khaybar and put to death many of its leaders. He took a wife, Saffiya, from Khaybar, after beheading her husband Kinana al Rabi of the Bani Nadir. Kinana was killed after being tortured to learn the location of the treasures of Khaybar. Mohammad allowed some Jews to live there, supposedly exacting a tribute of 50% of their crops. In 642, the caliph Umar expelled many of the Jews of Khaybar, but a Jewish community persisted there, especially around Katiba at least until the twelfth century.

According to Tarek Fatah, ‘Hayder’ refers to Ali, the son-in-law of Mohammad, who for Sunnis is the 4th Caliph, but for Shias was the rightful heir to lead Islam after Mohammad died. He fought in the Battler of Khaybar, and his sword is also known as ‘Hayder.’

Note also the dove holding an olive branch, with the sword concealed. This is also very deliberate – as mentioned above, Mohammad used a “hudna” (truce or ceasefire) to lull the Jews of Khaybar into a false sense of security before slaughtering them.

In other words, this sign is acknowledging that any so-called “peace treaties” are concealing the true aim – to slaughter the Jews or subject them to Dhimmitude.

But do tell me this is not essentially a religious conflict, but rather just about territory, and if we just negotiate a two-state solution based on the 67 lines, then peace will follow, as opposed to wholesale slaughter.

In other words, this sign shouldn’t just disturb you – it should enlighten you as to a root cause of the conflict.

Also noteworthy: those with the banner felt brazen enough to display it without any recriminations. What does that tell you about how emboldened they feel by the West’s lack of understanding of their true goals, or at least inaction?