Actor John Cusack After Getting Caught Tweeting Antisemitic Meme: “A Bot Made Me Do It!”

Contributor Mirabelle pointed out in the past how actor John Cusack is rabidly anti-Israel. So I knew it was only a matter of time before he went full antisemite.

In this case, it has taken years – but he is a great actor after all.

Cusack tweeted this full-on antisemitic meme (which is a quote by Neo Nazi child pornographer Kevin Alfred Strom, not Voltaire) 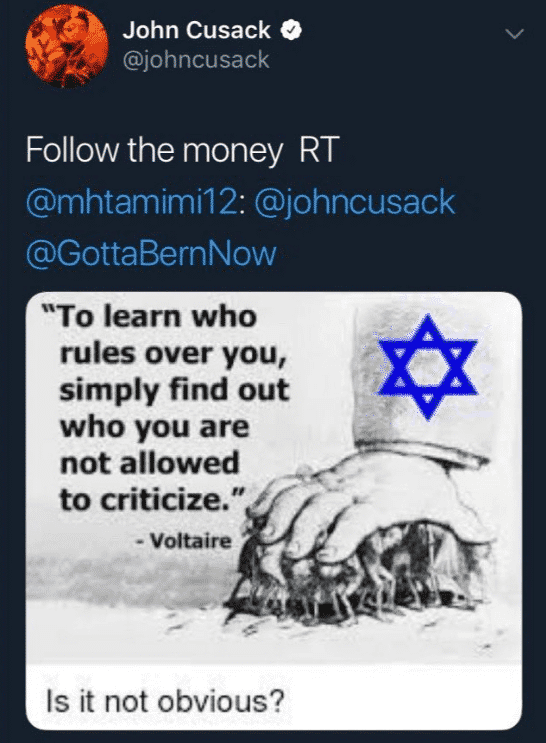 before deleting it and offering up one hell of a ridiculous excuse.

No word yet on whether it was one of Trump’s Russian bots. Or something. But the excuse was clearly bogus, given he repeatedly re-tweeted the meme and made anti-Israel comments.

3. John Cusack repeatedly defended his tweet before deleting it.

His “bot” excuse is absurd. pic.twitter.com/Jm2NArFVEO

Unless the bot was highly sophisticated. A Zionist Bot of DoomTM, as it were.

It stemmed from a defense of Israel bombing hospitals – by a candidate – RT @philledup: @johncusack Good catch

Ya the state violence – RT @JohnHerer420: @7hisDar1in9Man @johncusack @mhtamimi12 @GottaBernNow Its obviously meant to be the flag, put it this way I didnt think "jews" when i saw it…all I thought was "Israel".

Oh boy- yes- was referencing the bombing of a hospital – war inc – Israel and US will get called out. made a mistake retweeting that – as i said – and sorry – I’m anti fascist-in every respect –
RT @ResethO: So,https://t.co/8yQyW7E4AW

Of course, some of his best friends are Jewish (like this nincompoop defending him) so I think you know where I stand on John Cusack.

Our brother John Cusack made a mistake that included antisemitism.

His tweets are a little messy so I pasted them into one statement here.

Thank you @johncusack for the apology. Yes antisemitism has no place in dialog.

I guess Cusack found some inspiration from Jeremy Corbyn, who claimed he did not look closely enough at an antisemitic image he defended. He does seem to like him, after all.

(Note how Cusack seemed to include anti-Zionist-not-antisemite George Galloway in his reply tweet. I think that speaks volumes as well).

Clearly, John Cusack will say anything to deny he is antisemitic. But it is hard to conclude anything else after this latest episode.

Where @johncusack retweets an antisemitic meme used by neo-Nazis and then apologises by saying he thought it was pro-Palestinian content. Give the man credit for admitting that there is hardly a distinction between neo-Nazi antisemitism and anti-Israel content. https://t.co/B4WZ9wdMDz