In a new suit and a small bag of candy, the Palestinian child Mohammed Rabia ‘Alian, four years old, went from the town of Issawiya to the Salah al-Din police station in occupied Jerusalem after the occupation summoned him for interrogation this morning.

The occupation was called on Monday to call the child Mohammed to investigate him in the charge of throwing stones at an Israeli police vehicle while storming the town.

According to eyewitnesses, the child Mohammed, when he was going to his father’s office with the police station, was answering his question: “I am going to my grandfather’s house!

The Israeli occupation authorities declined to investigate the child, who was accompanied by journalists and citizens to the police station, and only entered the father to the center, where he was warned to repeat his son throwing stones at the police.

As usual, my Spidey senses buzz right away. For a start, it does not make sense that the Israeli police would summons a young child for interrogation, and then inexplicably refuse to investigate him. Plus other reports contradict basic details…like his age:

In the latest violation of the International Convention on the Rights of the Child, Israeli authorities on Monday issued a summons for a 3-year-old child to be brought to the Jerusalem police station for interrogation.

During an invasion of the East Jerusalem neighborhood of al-‘Isawiya Monday night, Israeli forces stormed the home of 3-year old Mohammad Rabi ‘Alian, and handed a summons to his parents for him to appear the following day for interrogation about possible stone throwing.

At the time of the summons, dozens of Palestinian residents of al-‘Isawiya accompanied the small boy to the interrogation center, holding a protest outside while he headed in to be interrogated by the Israeli police.

The Palestinian Prisoners Society called for an investigation into the incident, which they called a blatant example of the occupation’s criminality against children.

The head of the Commission, Maj. Gen. Kadri Abu Bakr, condemned the Israeli occupation authorities for summoning the 3-year old child, stressing that the occupation is committing open and clear crimes against minors.

Even Mahmoud Abbas’ Fatah posted about it..with yet a different age (of course): 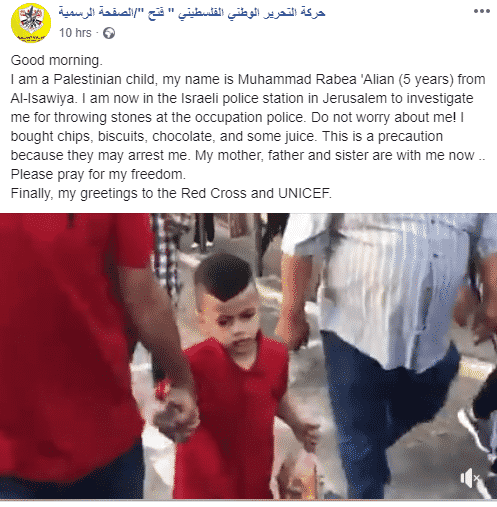 I acknowledge that palestinian sites not getting his age right is not proof they are lying. But it does indicate a lack of care with the truth.

Then we see the Israeli police have denied this is what occurred.

The Palestinian WAFA news agency reported on Tuesday that Israel Police summoned Muhammad Rabi’ Elayyan, a 4-year-old resident of the east Jerusalem neighborhood of Issawiya, for questioning on Monday at the police station on Salah Eddin Street on suspicion of throwing stones at a police vehicle.

When they arrived at the station, the police officers said that he wasn’t summoned and that there was no questioning. Elayyan showed the officers a paper confirming his name and Muhammad’s name.

“Contrary to the claim, because the minor was under the age of criminal culpability the police who arrived at the scene served a summons to the father only to come for a discussion at the police station in order to warn him about and clarify with him the actions of his son,” Israel Police tweeted in response to a tweet by MK Ahmad Tibi in which he attacked the police for allegedly summoning the 4-year-old for questioning.

“To our sorrow, this is a part of a serious and dangerous phenomenon in the area whereby small children are used for throwing rocks at security forces, some of [these cases] occur alongside and under the supervision of adults and family members standing near them, and such was the case in this incident,” added Israel Police.

In case you are wondering, here’s how I know (rather than just suspect) that the palestinians are lying and the Israeli police are telling the truth: anti-Israel, palestinian site Quds News Network posted this about a different, yet similar, case: 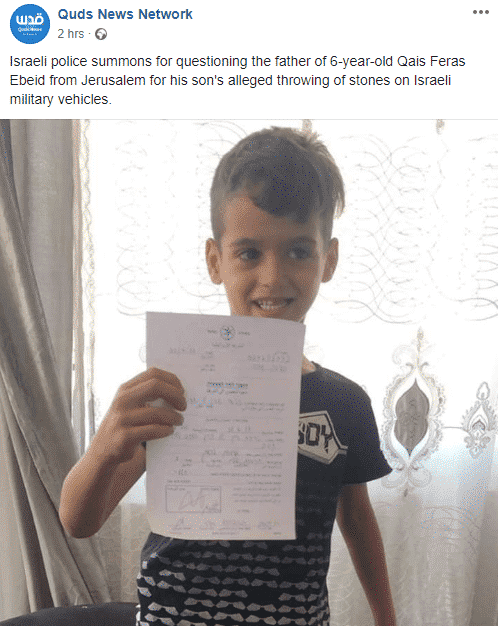 They are admitting that the Israeli police summoned the father of a young palestinian child accused of stone throwing and not the child himself.

In other words, the palestinians – including Mahmoud Abbas’ own party – are lying yet again. What’s more, they are exploiting a child in the process.

I highly recommend they spend less time on propaganda and more on educating their young children to not throw stones at others or otherwise engage in terror activity.