Was Jewish Voice for Peace Just Caught With an ‘Army’ of Fake Jews? (Updated)

This next story is a real doozy.

It started when blogger Elder of Ziyon noticed the Twitter account of one “Adam Greenblatt,” a supposed Orthodox Jewish JVP member. Elder rightly noticed that he looked from his profile photo about as Orthodox Jewish as I look like Arnold Schwarzenegger.

This guy @adamgreenblatt2 claims to be an Orthodox Jewish member of JVP, calling Israel an apartheid state.

Sure looks like @jvplive is trotting out fake Orthodox Jews to shore up its Jewish credentials. pic.twitter.com/Skj31UX7Ol 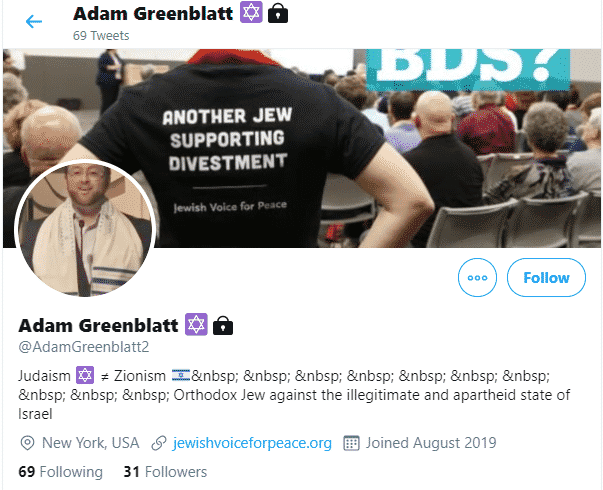 Seeing the tweet, I immediately searched Google and could not find this Adam Greenblatt character. I just knew it was a fake account, but wanted the proof. Then I noticed another tweeter had already dug it up.

The person behind the account simply took a screenshot of some reform Jewish singer called Josh Goldberg.

But it gets worse. They have a whole army of fake Jews!

Looking at fake "orthodox Jew" @adamgreenblatt2's followers, a lot just joined Twitter a few days ago. Check them out and see how fake they all are.

2. @brandsilber is a fake account with the image taken from a stock photo for “Jewish man”:https://t.co/o97CUJowq7 pic.twitter.com/zhvENKsRWM

3. @AdelbergChaim is also a fake account with the image taken from a stock photo as shown here:

4. “Dr. Aaron Blumstein” is a fake account. The picture is of a Rabbi who happened to be charged with a sex crime.https://t.co/Gvv7LDDwt7 pic.twitter.com/4SWVFEbE6X

5. "Jason Goldstein" is a fake account impersonating @HenMazzig using an image found in an NBC news story as a profile picture. @NBCNewshttps://t.co/oXJ7VJ1TzM pic.twitter.com/DpuwMiLqbd

And it gets even worse.

These are white supremacist accounts. pic.twitter.com/HqcU1tOXLO

The question is: who is behind it? My money is it really is JVP, since we have already seen them faking their Jewish credentials in order to bash Israel and even the Jewish people.

How low can they go? I bet they are willing to test the waters.

Update: After listening to the opinions others, it seems more likely this may be the work of the alt Right. Although it is hard to tell the difference between them and the far Left these days – at least when it comes to their Jew hatred.

Update: A further indication it was more likely the Alt Right:

This screenshot from an antisemitic group seems to explain this better than saying it is JVP. pic.twitter.com/t9U1AHvBE6