Could thousands of white, armor-clad stormtroopers shouldering blaster rifles soon march in perfect unison through the streets of Jerusalem and Tel Aviv?

Indeed, these Star Wars stormtroopers are a sight in many cities around the world. However, they are not the army of some hostile foreign power, but a corps of a mighty interstellar empire from a long time ago in a galaxy far, far away.

And now that this imperial army has established its first outpost in Israel, this future is certainly possible.The stormtroopers are members of the 501st Legion, one of the largest fandom organizations in the world.

Founded in 1997, the legion – also known as “Vader’s Fist” – is a staple of geek conventions and boasts 14,000 active members across 64 countries on six continents. For the Israeli outpost’s founder, Adam Nahoum, Star Wars has been a major part of his life since he was a child.

Once he was finally approved last month, Nahoum chose the designation TK-51948, with TK referring to the group’s designation for stormtrooper (referencing the line from Star Wars “TK-421, why aren’t you at your post?”) and 51948 referring to May 1948, when Israel declared independence.

After being officially inducted into the ranks of the 501st Legion, Nahoum then applied to establish an outpost in Israel.

“An outpost has one to 24 members, and to apply, you need a logo with original art and a mission statement,” he said. “More than 24 members and you have a garrison. Some places, like the US, are so big that they’re even divided into units,” he said.

Nahoum had a logo designed by a graphic designer in Spain, wrote a mission statement, and applied to register the outpost, which was approved at the end of August. While its membership in Israel is small, the outpost is part of a global community. The Israeli outpost has received messages of support from troopers across the universe.

“It’s a bit like a fraternity,” Nahoum said. “When they launched us, we got all these beautiful comments from countries all over the world. There are others in the Middle East, in Saudi Arabia and the UAE. I even received [messages of congratulations] from people as far away as Indonesia.”

What’s that sound? It’s as if millions of BDS voices suddenly cried out in terror and were suddenly silenced.

Here’s something else to make that wretched hive of scum and villainy feel a disturbance in the Force.

Bonus factoid to make BDS-holes lose their Sith: Adam Nahoum seems to be related to Fleur Hassan-Nahoum, the wonderful Deputy Mayor of Jerusalem!

Although Adam, what are you trying to say here? 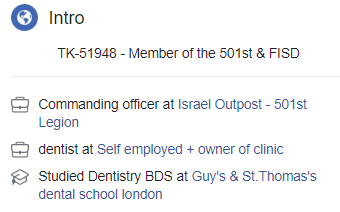