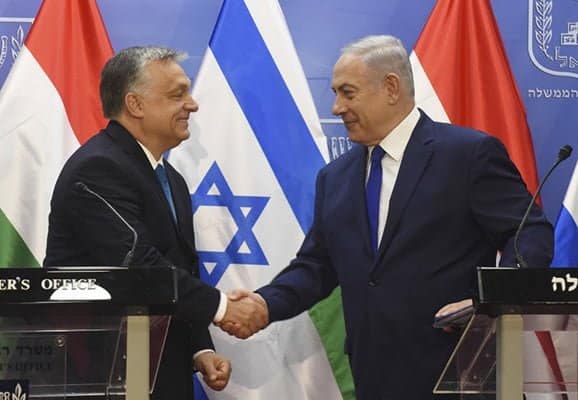 As journalists who cover Israeli-Hungarian relations and scholars who care deeply about the growing historical understanding between the Hungarian and Jewish people, sadly we cannot wait with this letter any longer. Though we greatly appreciate and value your work, we were baffled to read your lines in your latest interview in The Times of Israel.

Professor, speaking to the Times of Israel on July 9th, you, as world-renowned Holocaust scholar, condemned Israeli PM Benjamin Netanyahu’s warm ties with the governments of Hungary and Poland, countries which, according to you Professor, “engage in antisemitism” and “soft-core denial.”

Since you have in the past dedicated much effort to spreading Holocaust awareness and educating the non-Jewish masses about the 20th-century tragedy of the Jewish people, we believe that talking about this subject should have been exercised with a lot more caution.

Viktor Orbán, though somewhat controversial and considered right-wing, is by no means antisemitic, let alone a Holocaust-denier.

In fact, already during his first government, in 2001, Orbán made Holocaust remembrance days compulsory in Hungarian schools and financed the renovation of the so-called “Hungarian barracks” in Auschwitz.

Orbán has personally acknowledged Hungary’s guilt in the Holocaust. And while we understand that it won’t change the past, the current government has done the utmost that could be done in such affairs. On July 18th 2017, during Netanyahu’s visit to Budapest, Orbán stated that “Hungary has committed a mistake, even a sin, in collaborating with the Nazis instead of protecting the [Hungarian] Jewish community during the Second World War”. What else should the Hungarian government do, Professor Lipstadt, for people to acknowledge that antisemitism has shifted from Eastern Europe to the Western World – even if some would still accuse Hungary of antisemitism today because of the country’s past.

During Orbán’s various terms, he has donated considerable sums to the renovations of synagogues not only in Hungary but also in the neighboring territories where many Hungarian Jews lived before the Holocaust. To offer you factual examples, see the Szeged synagogue in Southern Hungary or the Szabadka synagogue in Serbia. What antisemite would donate government funds to renovate synagogues not only in his country but in other states as well? Throughout the past few years, Jewish museums (such as the “rabbi’s house of Mád”) and cemeteries have been built and rebuilt through Hungarian government funding.

So much for history and tradition.

But while several European countries readily acknowledge their Holocaust guilt and yet dabble in anti-Zionism and anti-Israeli rhetoric at the same time, Hungary is not one of these nations.

Hungarian foreign policy is consistently pro-Israel. Hungary regularly abstains from UN condemnations of the Jewish state and Hungary’s leading politicians – such as Foreign Minister Péter Szijjártó and Orbán himself – regularly affirm Israel’s right to protect itself. The situation is not different in the EU either, where Hungary has stopped several anti-Israel legislative proposals and keeps on stopping anything that holds double standards again the Jewish state. The most recent example being that failed initiative that would have prevented EU members from opening representative offices in Jerusalem. This again was stopped by Hungary and the Czech Republic.

And while antisemitism is on a continuous rise throughout Western Europe and it reaches an alarming state in the U.S., Hungarian Jewry, which still constitutes the third largest community in mainland Europe, enjoys a secure existence.

While during the past year, there were 1652 antisemitic atrocities in the United Kingdom, 1646 in Germany and 230 in the Netherlands (in all countries most of these attacks were not verbal, but brutal, violent and often deadly), Hungarian Jewry faced 32 attacks, three of which were incidents of light physical abuse.

We understand that even one attack is one too many, one simply cannot look at these numbers and conclude with honest consciousness that Hungarian Jewry is at danger and that the Hungarian leadership is antisemitic.

Recent surveys by the Action and Protection Foundation (TEV), which is the Hungarian-Jewish antisemitism watchdog organization, showed that during the past year the support for Israel rose among Hungarians and that the controversial anti-Soros campaign had little effect on society, as barely 1% of Hungarians associate George Soros with Jewry. And yet, Professor Lipstadt seems to find comfort in labeling the Hungarian government antisemitic using George Soros as a supportive example. That Soros, who is heavily involved in the support and financial funding of several BDS nonprofits, which, today, is the leading movement of antisemitism with the pretense of anti-Israelism.

As journalists who cover Israeli-Hungarian relations and scholars who care deeply about the growing historical understanding between the Hungarian vis-a-vis Jewish people, let us firmly, but respectfully ask you to use your influence to ease the tension between our people instead of feeding tension. Hungarian Jews are safe. Hungary is consistently pro-Israel in its foreign policy. Tourism between the two countries has never been better. Jewish festivals in Hungary have been flourishing, and there is no need for armed protection to ensure that Jewish holidays are kept safe from terrorist attacks.

And perhaps, seeing all the alarming numbers elsewhere, we should appreciate these facts.

Therefore, we genuinely hope that Professor Lipstadt will reconsider her position when it comes to the affairs of Hungarian Jewry. Even if the current Hungarian government is not something the Professor can support, we hope that facts and statistics can overweight a personal distaste.