Home Ahava The Writings of Ahava Emunah Lange: Blown Away

I have many reasons for sharing my journey… some of them I’m only discovering as I go. Spiritually and emotionally, I’ve received so much strengthening of the soul (chizzuk in Hebrew) from so many people near and far. I’m genuinely convinced that part of this ghastly test is also a huge blessing. One of the great things about sharing my journey publicly is, not only the loving and supportive feedback I receive from people who tell me that my writing has helped them through a difficult time or inspired them in some way, but also the kindness that I gained from people who were complete strangers one moment and have either remained so or have come into my life to stay.

When I first started chemotherapy back in September, 2012, one of the side effects I suffered from was painful ulcers in my mouth and throat. I received many suggestions from readers of my blog on how to help relieve them. The two things that helped were a combination of sucking on ice during chemotherapy and the other thing came from a woman named, Carol, who I’ve never met in person via my friend, Suzanne; Kanka mouth gel. I was so touched that Carol took the time and expense to send me the mouth gel which isn’t available here, in Israel. Fast forward to Chemotherapy The Sequel. I’m back in chemo and once again dreading the side effects. I received an offer of mouth sore medicine that is still in clinical trial from a stranger, A.H. that for whatever reason I wasn’t able to follow up on yet I’m moved by the kindness of a stranger. In the meantime, my friend, Tzippy, spoke with her friend, Moti, and the rest of the story will blow your mind. 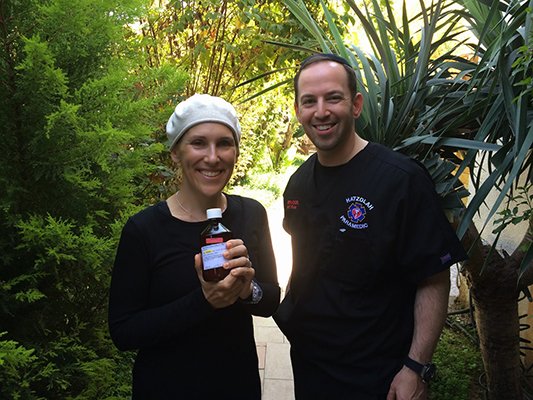 For the past 7 years, a scientist in America, has been working on a solution to the terrible mouth sores that chemotherapy patients suffer from. These mouth ulcers have been known to be so painful that simple things like eating, drinking, and even talking are impossible. Many medicines are available on the market but there’s never been one that completely adheres to the sores or heals them. It’s very problematic to get medicine to remain inside the mouth over time, for obvious reasons. Well, a miraculous medicine has been successfully developed and it is currently available in the United States on a very limited and exclusive basis as it has just been approved and is gradually making its way onto the market.  Last Tuesday, accompanied by 2 men I’d never met before, some of it came to Israel for the first time. I met these two strangers, a man named, Moti, who heard about my story from my friend, Tzippy, and the other, a paramedic named, Sim, who heard about me from Moti. A bit of a sting operation went down, orchestrated by people who had never met me, and within 24 hours, including a Fed-Ex trip from Florida to New Jersey and a VIP seat on a plane from the United States to Israel, Sim, the paramedic, Moti, and 2 bottles of this expensive, prescription-only medicine arrived at my house! Sim, the paramedic, was so enthusiastic about being able to deliver this miracle medicine to me, he and Moti drove directly to my house from the airport! This medical product is incredible! Thankfully, the sores that I have from the first treatment of chemotherapy were mild so far in comparison, however after using the mouth gel only one time, I barely noticed them at all! The effect of the mouth gel was so powerful, I think I can confidently stop sucking on ice throughout the actual chemo treatment knowing that I can rely on the mouth gel. The level and amount of kindness (chessed) that went into bringing such a change, a solution, to one person, one stranger… I’m just blown away! When I think about it, I don’t know what is more incredible…. the actual medicine or the story of how it arrived. I hope that this will only be the beginning of this story and that somehow this mouth sore cure will be made available both in America and in Israel, and around the world, to cancer patients who suffer so horribly from painful mouth ulcers during chemotherapy. That would send an absolute #happylanche to so many people who truly need it. I hope that’s going to happen. I believe it will.