A group called Justice for Muslims Collective decided to commemorate the Sept 11 attacks with a special event – an exhibition called “Shattering Justice & Re-Making the Muslim Threat: A Visual Timeline,” in Washington D.C, held on Sept 11th itself. 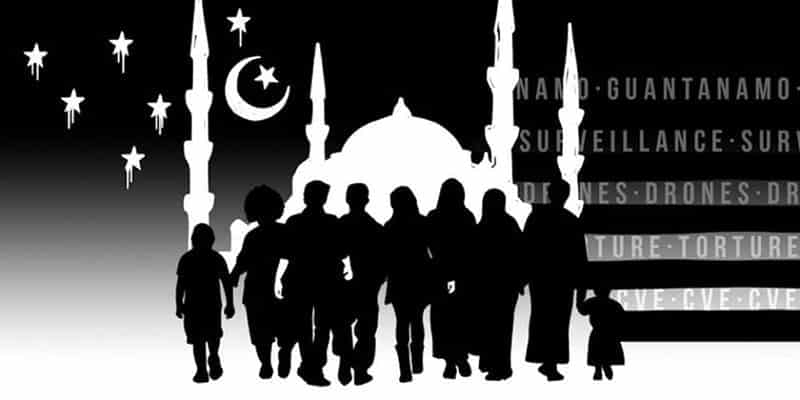 This event, which is a launch of our War on Terror timeline exhibit that details the many laws and policies that have targeted Muslims. Through our carefully curated poster series, attendees coming to the exhibit will able to better understand what the War on Terror has meant for Muslims both domestically and abroad.

Complementing the exhibit, there will be a keynote talk by Dr. Maha Hilal, who envisioned the exhibit and who is an expert on institutionalized Islamophobia in the War on Terror.

Here’s more on this exhibition:

On the 18-year anniversary of the 9/11 terrorist attacks that set off the ongoing global war on terror, a new visual timeline seeks to document the U.S. policies and programs that Muslim and civil rights activists say have resulted in major encroachments on human rights.

“The goal is to really underscore how the war on terror is so rooted in Islamophobia and to really lift up the story of the ways that Muslims have been impacted,” said Maha Hilal, a researcher on the war on terror and co-director of the Justice for Muslims Collective who directed the yearlong effort to produce the timeline.

Illustrator Zaynub Siddiqui and graphic designer Maura Dwyer from The Sanctuaries DC, a community space for artists and activists that includes several Muslim members, illustrated and designed the 19 panels that comprise the timeline.

“Every single time I read one of the event’s descriptions, I would just be horrified,” she said. “I could have finished it earlier but it was so grim … it was difficult to read about these things that were happening to my people, to our ummah (community), and realize that this was planned.”

When viewers pair that language with her drawings, she said, they will walk away with a better understanding of how the war on terror has impacted Muslims.

In other words, this group has decided to commemorate the Sept 11 terror attacks, with an exhibition displaying how Muslims have been affected by them, with not a word about the real victims of these Islamic attacks.

If this sounds familiar, that’s because we have seen it before.

From the likes of Linda Sarsour

and of course Ilhan Omar

Incidentally, Maha Hilal, the co-director of the Justice for Muslims Collective who directed this event, seems to be someone who supports palestinian terrorism.

Which somehow doesn’t surprise me.