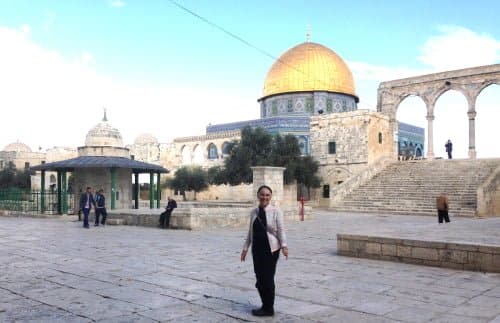 The first time I set foot in Israel was also the day that I made Aliyah. I immigrated to the Holy Land on an El Al flight with my dad and (pregnant) mom, 3 brothers, 1 Amazon Parrot, 1 cat, 1 Standard Poodle dog, and about 16 suitcases. It took two overloaded taxis to transport us from Ben Gurion Airport to our new home in Jerusalem, Israel. It was July, 1991. There were no cellphones, there was no GPS, and of course we got lost, separated, and reunited. Everything was an adventure. Our first home in Israel, was in a neighborhood called Trager, in Ramot Aleph. Our first taste of the Holy Land was on Nerot Shabbat Street (Shabbat Candle Street) and a pizza dinner provided by our welcoming neighbors. I have many memories of our first experiences in Israel and I’m sure I’ve also forgotten a lot too. Immigrating to a Middle Eastern country, from glamorous La La Land, Los Angeles, California, at age 15 and a half… well, that plot would make for great tween viewing and may have already been done; by Disney and others.

My most impressionable and nostalgic memories include visits to the Old City of Jerusalem and the Kotel, The Western Wall. I remember approaching the tremendous stones of the utmost sacred site in the Jewish religion, The Wailing Wall, for the first time. The experience of visiting such a holy place had been built up for me by friends and teachers. I feared that I wouldn’t absorb the holiness of the experience. What if I didn’t feel the greatness of the place; The Wall. My legs trembled. My heart pounded. I stuffed handwritten notes into the crevices of the great and holy wall. All was well.

Over the years, I’ve been back to visit The Kotel many times. Each time, I savor walking through the arches of Jaffa Gate. Each step over the slippery stones, down the ancient narrow passageways, carries you on a journey unlike any other. Many foreign languages can be heard all around, and tourists and pilgrims of every religion and color mingle in the corridors of the Old City. Approaching the countless stone stairs, leading down to the grand lobby of The Kotel, takes my breath away each and every time. I catch my breath as I behold the breathtaking view of the Western Wall and just above it, the golden dome in the courtyard of the holiest place, Har HaBayit, The Temple Mount.

It’s impossible to mention, The Temple Mount, without acknowledging controversy and heartache. Politics and religious unrest. As you approach the monument of the heart and soul of Judaism, we do not ignore the importance of this holy site to other religions; Christianity and Islam. For as long as I’ve known of this holy place, I’ve also known that while all religions are permitted to visit The Western Wall, it’s forbidden, by Israeli law, for Jews and Christians, and any religion except Islam, to pray on The Temple Mount. While Muslims are the only religion allowed to freely visit, and pray on the Temple Mount, a Jew or Christian doing so may be arrested. The Temple Mount is possibly the only religious holy site, in the free world, where Jews are categorically forbidden to visit and pray freely.

I had never been up on The Temple Mount. I had never attempted or planned to visit until last week. I knew of few people who had done it. It was Monday morning and I had plans to meet up with my friend, Sarah. She’d agreed to take me on a tour of some of the city’s best kept secret views. We planned to enjoy some rooftop artistry. I was charged and stoked with a passion that can only be felt in the crispy archaic atmosphere of Old Jerusalem. As we toured the narrow alleyways of the Old City, we sampled the expedition with all of our senses. We inhaled the aromas of spices, in the Arab Shouk, and soaked up the rays of sun peaking through the colorful fabrics of scarves and traditional garments blowing in the wind above our heads. We chatted leisurely while taking in the sights and colors, and engaged in touristy exploration, basking in the frisky ambiance.  The air was moist and the scent of impending rain dangled low in the sky, enhanced the vibe of festivity and tranquility. Sarah, a seasoned guide of the ancient streets, called the mood “playful”, and explained how much the vibe had improved since the summer war. I brought up the recent shooting of Rav Yehuda Glick, in a terrorist attempt on his life, and we got to speaking about visiting the Temple Mount. What was that like? Sarah said, “Let’s go!” It seemed like something we were meant to do.

The next opportunity to ascend was in 45 minutes so we joined a line of Christian tourists who were gathering at the entrance of the security gate. One group after the other, we witnessed crowds of people celebrating. Men, playing clarinets and drums, led dancing groups of families and Bar Mitzvah boys up to The Kotel. Beating the drums and singing, Shalom Alechem, Dovid Melech Yisrael, while spinning in a happy Hora, suddenly, a man grabbed me by the arms and pulled me into the center of a dancing storm. Ordinarily, I would decline a dance with a stranger, especially with a man, however, I felt moved to accept the invitation into the celebratory Hora. I was swept up in the excitement. We clapped and danced and were pelted with candies. Photographers flashed our pictures. Hundreds of tourists looked on; some joined in the festivities, others marveled.

Finally, it was time to approach the stringent security check, before ascending the Temple Mount. The Israeli policemen were very strict. They carefully examined each and every item in our bags. No papers allowed. No prayer books. No laptops. An obviously Jewish religious group of women were held back. Would Sarah and I make it through the security check? I overheard the head policeman say, “Make sure no journalists get through!”. Sarah and I exchanged glances. We stayed calm. The laptop had to stay behind but we were allowed entry to the Temple Mount! As we walked through the wood-slated tunnel, up to Har HaBayit, my legs felt like jelly. Sarah and I walked arm-in-arm. As we walked through the courtyard, towards the Dome Of The Rock, the enormity of the experience made my heart drum.

A group of Muslim women screamed, “Alluwakbar!” repeatedly and for a moment we grabbed onto each other with uncertainty. An Arab guard shouted at us to cover up our chests though we were both dressed modestly. I felt invigorated and overwhelmed with spiritual emotion. While acknowledging the possible danger of being up there, my overall senses were exhilaration, joy, and closeness to G-d. I silently chanted, Shema Yisrael, and took time to pray, in my heart. I’m aware of the fact that many religious Jews refrain from visiting the Temple Mount due to the theory that we are presumed to be in a state of ritual impurity which cannot be purified without the ashes of the Para Adumah (Red Heifer). Although we do not have a way of removing “tumat met,” the ritual impurity caused by contact with the dead, we are actually permitted to enter the peripheral areas of Har HaBayit. Refraining from visiting the Temple Mount, really depends on an individual’s political concerns or archaeological and halachic uncertainties. According to the Temple Mount Center website, Har HaBayit is open to Jews and tourists on Sunday through Thursday from approximately 7:30-10:30 A.M. and 12:30-1:30 P.M. in the winter. Visiting hours change according to decisions made by the Police on a daily basis.

The views from atop Har HaBayit were breathtaking. It’s indescribable and the emotions and spiritual air is something that could easily become addictive. Sarah and I walked freely, taking photos and solemnly observing the holiness of the site. We were not there to make political statements or be activists. We made friendly eye contact with other visitors yet we felt the stares and displacing silent communication; No Jews welcome here. Go Away Jews.

The very next day, reports of riots are in the news. Two more terrorist attacks have broken the peaceful mood, once again, in the Holy City. The Temple Mount is at the center of religious tug-of-war. World leaders and religious leaders warn of the dangers of inflaming and furthering the imbalance and unrest. Today, it’s not safe to visit the Temple Mount, not for Christians, or Jews, or tourists. The holy city of Jerusalem is in turmoil. Her ancient stone streets echo with pain, and there will be no Jews on the Temple Mount for now. The playfulness, of that Monday morning, evaporated until another time. We will ascend. We will be back. Holy Jerusalem. Jerusalem of peace.