The Writings of Ahava Emunah Lange: Hitting The Wall 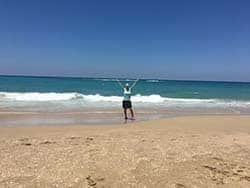 Along my journey, I’ve learned that my fear is sometimes far worse than reality. Over the past 5 years, I’ve had to deal with frequent assault, threat, and uncertainty about my health and survival. If life is a journey, I’ve had my share of forks in the road. I’ve had to choose between different paths and I’ve hit roadblocks and even walls. It seems that life itself is so unpredictable that sometimes the only thing to be done is to harness the fear and marvel at it as yet another human sensation.

I seem to be better at creating imagery and making revelations than taking and internalizing reality. In turning my fear into a sensation and normalizing this almost constant struggle between true threat on my life and true happiness; danger versus euphoria, I’ve come to yet another revelation also involving imagery. Life is like a marathon. Runners will relate and I can tell you how excruciating and disappointing it feels to Hit The Wall.

Everyone who trains for a marathon will Hit The Wall. So many factors contribute to the experience, and some are within your control and some are completely out of your command. Just like cancer – it can be genetic or environmental, and sometimes we just don’t know. Treatments lead to healing but sometimes even the best treatments can fail. It’s not completely in our control and a marathon runner never stops training for their next race day.

In the runner’s world, hitting the wall means depleting your stored energy source resulting in physical fatigue and extreme emotional negativity goes along with it. A form of carbohydrate called glycogen is stored in our muscles and liver for energy and when those stores run out… you hit the wall. When the body’s most available fuel source burns out, even your brain wants to shut down in order to preserve energy, which leads to the negative emotions that accompany hitting the wall.

I’ve been through so much pain and faced so many tribulations and who hasn’t? Over the past 5 years, I’ve shared my journey with all the bumps, forks, crossroads, and junctions. Let me tell you… this time: I finally Hit The Wall. I smashed into that wall so hard, the bricks and mortar came crashing down and buried me deep under a pile so heavy I’m amazed I was able to climb out for air. I’m still on my hands and knees. I’m still climbing out and perhaps being pulled out is a more honest description.

Not every single day in life can or should be “race day”. Why fear Hitting The Wall every single day? I like to say that I run with cancer and not from it. I aspire to live life as a journey; not something to be feared, fought, or conquered (unless it’s race day, of course).
Living a meaningful and productive life is more than just logging the miles. Living is a comprehensive process of body, mind, and spirit. At the end of it you should aspire to go through a complete metamorphosis into a runner that is warmed up, prepared and ready to be able to deal with all of the requirements of the marathon. Between stored energy, boosts of energy from resources around you (family, friends and community) and accessible faith, we actually do have the ability to run many, many miles.

I’m praying for the strength and miracles to stay in the race and keep on running….