It is no secret that Israel’s first Prime Minister, David Ben Gurion, led a secular life. But what many may not realize is his knowledge of, and respect for, Torah.

Ben-Gurion was asked to write the introduction to the book Sefer Hebron (The Book of Hebron) by Oded Avisar (1970), and this is what he wrote: 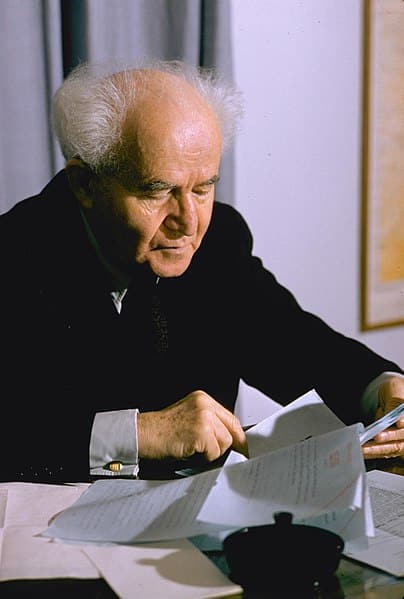 Three cities hold a great and unique place in the ancient history of our people: Shechem, Hebron and Jerusalem. In the Book of Genesis (Bereshit) we are told that Terach took his son Abram, his nephew Lot and his daughter-in-law Sarai, Abram’s wife and left Ur Kasdim bound for Canaan. On route they reached Haran and dwelt there. Terach died in Haran.

Then the Almighty said to Abram: “Go forth from your land, from your birth place and from your father’s house to the land that I shall show you… and Abram went forth as he had been told by the Eternal… and he took with him Sarai his wife, Lot his nephew, all their possessions and the souls that they had acquired in Haran… and they came to the Land of Canaan. And Abram passed through the land until the place Shechem… and the Eternal appeared to Abram and said, “Unto your children shall I give this land.” There Abram built there an altar unto the Eternal who had appeared to him-and Abram continued his journey southward… and Abram made his camp and came and settled in the Plains of Mamre that are in Hebron and he built an alter to the Almighty.” (Genesis 12).

Hebrew history begins in Hebron. In Hebron… there arose the first Hebrew armed force, which battled with four great kings… because they had captured Abram’s nephew Lot and his property. When Abram heard this in Hebron, he immediately mobilized 318 of his followers and pursued the four kings up to Dan in the north, where he attacked at night and destroyed them, and rescued all the property and his nephew Lot, the women and the rest of the captives. This was the first war in Jewish history, which ended not merely with victory, but also with a demonstration of Abram’s breadth of spirit…

When Sarah died in Hebron at the age of one hundred and twenty-seven, Abraham turned to the Hittites to grant him a burial plot. After prolonged and devious negotiations by the Hittites, Abraham paid four hundred silver shekels to Ephron for his field and all the trees surrounding its boundaries-and it became his. And when Abraham died 38 years later, he was buried by his sons Isaac and Ishmael in the cave which Abraham had bought from the Hittites.

Before Jacob died in Egypt, after going down there to see his son Joseph, he made his sons promise to bury him with his fathers “in Hebron in the cave, in Ephron the Hittite’s field, where were buried Abraham and his wife Sarah, Isaac and his wife Rebecca and where I buried Leah” (Genesis 49:29, 31). And that is what Joseph and his brothers did. It is thus clear that only the three Patriarchs and the three Matriarchs of the Jewish People were buried in the Cave of Machpela.

However, the importance of Hebron is not merely its role in the lives of the Patriarchs and Matriarchs of our nation. After Saul, the first King of Israel fell upon his sword in the war with the Philistines, so that he might not be taken captive, and David replaced him as King, David inquired of the Eternal: “Shall I go up to one of the cities of Judah?” And the Eternal answered: Go up!” And David said: “Unto where shall I go up?” And G-d answered” “To Hebron.” And David went up there… and the men of Judah came and anointed David there as King of Judah” (Samuel II,2.4). Finally, after the death of Abner, commander of Saul’s army, “and all the tribes of Israel came to David in Hebron and proclaimed: “Behold we are of the bone and flesh; and so it was yesterday and the day before, while Saul was King over us, it was you who were the leader of Israel; and the Almighty has said “You shall shepherd my people Israel and you shall be prince of Israel.” And all the elders of Israel came to the king in Hebron, and King David made a covenant with them in Hebron over Israel” (Samuel II, 5:1-3). Thus arose in Hebron the greatest royal dynasty that Israel ever had.

The city of Jerusalem — which became in the course of time, from the crowning of David until our own days, not merely the most precious and Holy City in the Land of Israel, but one of the most revered cities in the world is not mentioned at all in the Five Books of the Torah. Further, after the reign of David who captured the city Jerusalem from the Jebusites and made it the eternal capital of Israel and his son, King Solomon, built the Beit HaMikdash (Temple) within her. After Solomon died the people of Israel came to crown his son Rechavam, not in Jerusalem, but in Shechem. And of the forty years of David’s reign, seven and a half he ruled in Hebron, while Jerusalem, though not mentioned at all in the Torah, was made by Israel’s greatest king into the city of holiness.

However, don’t forget: the beginnings of Israel’s greatest king were in Hebron, the city to which came the first Hebrew about eight hundred years before King David, and we will make a great and awful mistake if we fail to settle Hebron, neighbor and predecessor of Jerusalem, with a large Jewish settlement, constantly growing and expanding, very soon. This will also be a blessing to the Arab neighbors. Hebron is worthy to be Jerusalem’s sister.

The fact that even a secular leader like Ben-Gurion still understood the religious significance of Hebron should help you understand better just what this land means to the Jewish people.