My friend David Collier – who is one heck of a researcher – has a lot more on the pro-Corbyn letter purportedly written by a group called United European Jews. After calling the clearly fake phone number, he actually went to the addresses listed on the letter (yes, there were apparently two versions of the letter with slightly different addresses). Here is what he found. 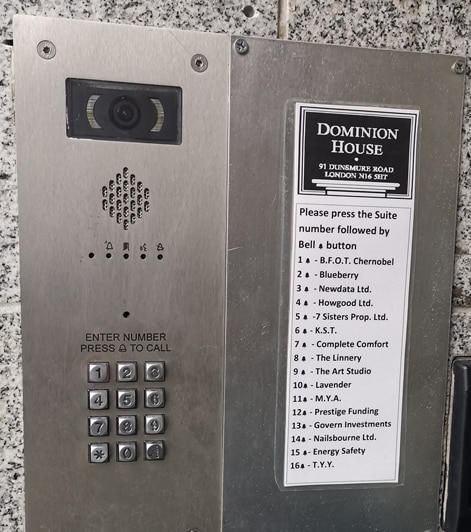 We rang the buzzer for both number 10 and number 14. Nobody answered. As luck would have it, a man carrying a carpet walked out – they are doing large-scale renovations inside – so we took the opportunity to enter the building. We made our way to number 10, or we would have done had it existed. It appears the renovations have expanded the building – so where number 10 used to be is just a new passageway. We reached a landing with unit 11, a sign towards units 7-9 and another from 12-16. There was no number 10.

We made our way to number 14. There was no sign on the door. We knocked – no answer.

There were signs of life in other offices – so we made our way around. All of the people we encountered were orthodox. The conversations were enlightening. The first person said that they had never heard of the group ‘United European Jews’. He told us number 14 was not an office for a united orthodox Jewish group but rather a ‘ladies underwear business’.

I knew the person behind the letter had made a tit of himself, but wow.

We spoke to a man who knew about the letter. He also told he had heard it was ‘a fake’. He said that the group had nothing to do with the building and informed us that the *community* was outraged. There was more. He said the landlord was furious his address appears on the letter. He went on and said the people responsible should be ‘strung up by their feet’. One told us they had been discussing the letter in an online group with friends and was aware contact had been made with at least one of the Rabbis mentioned in the letter – who insisted he had never seen the letter, never signed it and even joked about having never heard of ‘Corbyn’.

A really friendly young orthodox man who runs his own business from the building told us that some of the names on the letter were real, but they were just cobbled together to be used as propaganda and said ‘they had done it before’. He told us the frustrated landlord had asked him ‘what he could do about it’.

None of these people supported the letter. They all expressed concerns about antisemitism. They were all horrified their voice was being appropriated and misrepresented.

Read the entire thing. You will be convinced, as am I, that this letter is yet another dishonest attempt to make Corbyn appear kosher.

And do follow David Collier for all things British.