Know Your History: What Gamal Abdel Nasser Said About The “West Bank” and Gaza

In February 1970, Egyptian President Gamal Abdel Nasser was interviewed by James Reston of The New York Times. It is a very interesting interview to understand the Egyptian mentality, but I want to draw your attention in particular to his explanation as to why they opposed direct negotiations with Israel: 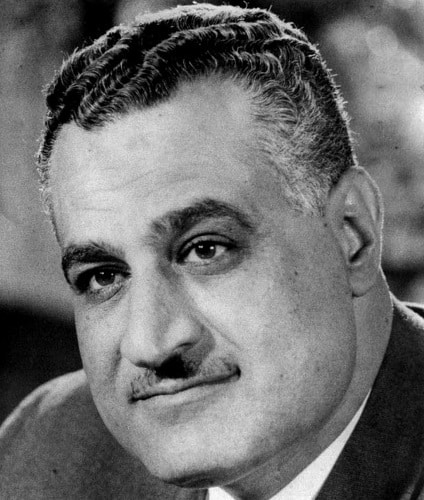 Q. Could you explain your strong objections to direct negotiations with Israel. The United States doesn’t recognize China but negotiates with its people in Warsaw. What’s the difference in your situation?

A. Really I think there is a big difference. I don’t think you occupy a part of China, or China a part of the United States, but Israel occupied 20 per cent of our territory, about 70 per cent of Jordanian territory, and about 10 per cent of Syrian territory. So if we sit at this table with Israel] not it will be table of of capitulation. This means we would accept unconditional surrender.

The “20% of our [Egyptian] territory” he speaks of is the Sinai Peninsula and Gaza Strip, while the “70% of Jordanian territory” is the so-called “West Bank” and East Jerusalem.

Let that sink in for a second.

He did not call it “palestinian territory” – because it wasn’t.

This might sound obvious, but the world has forgotten. When people talk of a “palestinian state”, the concept always includes the so-called West Bank, Gaza and east Jerusalem as its capital. Only once Israel was in control were the Arabs calling for those lands for a palestinian state.

After the Rhodes agreement, there was a resolution from the Security Council about the refugees, to return to their homeland, and to have compensation

Then what came after that was that more than one million Arabs were driven out of their homeland, deprived of their property, deprived of everything. Israel refused to implement the resolution of the United Nations about the refugees. So the Arabs said that in order to have any agreement there must be a just solution about the refugees, but there was no solution.

If we want peace, well, there will be a clear and just basis for peace, and this is the resolution of the Security Council, complete withdrawal from the occupied territories, including Jerusalem, then, a just solution for the refugees, and after that, there will be no problem.

If they evacuate the occupied territories and solve the refugee problem, I will recognize Israel

When he speaks of the right of return, he is speaking of returning to “Israel” proper, not the so-called West Bank and Gaza Strip. Remember, during the War of Independence, the palestinian Arabs actually fled not only to countries like Lebanon and Syria but also to the so-called West Bank and Gaza! So clause 11 of UN Resolution 194 is speaking of the right of return to Israel proper, not these areas. And this is to what Nasser is referring.

This is reinforced by him speaking of first “evacuating the occupied territories” and then “solving the refugee problem.”

Of course, he wanted this solution as a means to destroy the Jewish state.

Q. This is interesting be cause one of your colleagues said the problem for Egypt is the Israeli state, we don’t mind a Jewish homeland, but a Jewish state is intolerable.

A. You know, he is right to some extent. What I say, really, is that there will be a state which has Jews, Moslems, Christians, because who were expelled out of Israel? The Christians and the Moslems. When the refugees return, it will be, really, not a fanatic state as it is now— because they are speaking about Judaism and the state of Judaism. We don’t speak the state of Islam.

Most of the world parrots the same mantras about this conflict without really understanding the conflict and the frauds perpetrated by the other side and their ever-changing narrative.