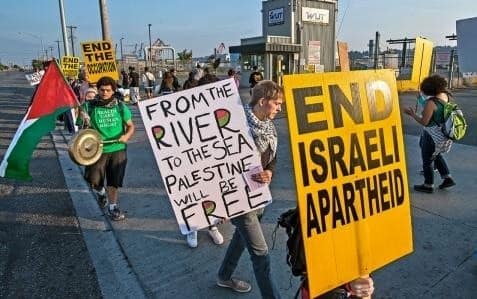 By recently passing a resolution recognizing anti-Zionism as a form of antisemitism, the French parliament simply adopted the respected International Holocaust Remembrance Alliance working definition of antisemitism. While this is a step in the right direction, the French parliament appears ignorant about Zionism and anti-Zionism. For instance, the French resolution declared, “Anti-Zionist acts can at times hide antisemitic realities.” By contrast, the International Holocaust Remembrance Alliance definition of antisemitism includes “Denying the Jewish people their right to self-determination, e.g., by claiming that the existence of a State of Israel is a racist endeavor.” In other words, anti-Zionism does not merely “hide antisemitic realities” as the French parliament claims. Anti-Zionism is antisemitic in itself because it singles out the Jews by demonizing the Jewish people and denies its right to national self-determination.

Unsurprisingly, many critics of Israel deny that anti-Zionism equals antisemitism. This is particularly true among critics affiliated with the political Left. They tend to deny that they harbor any hatred of Jews. Instead, they merely see themselves as “Israel critics”. Israel critics claim that equating anti-Zionism with anti-semitism seeks to stifle criticism of Israel and Israeli policies, especially towards the Arab population in Judea, Samaria and Gaza. However, anti-Zionism has nothing to do with criticism of specific Israeli policies. Antisemitism is a total rejection of the Jewish nation state’s right to exist as an independent state within any borders.

Much of the global left opposed America’s and Britain’s military campaigns in Afghanistan and Iraq. However, no serious commentator demanded the destruction of America or Britain. Among the world’s roughly 200 states, Israel is the only country whose very existence is constantly questioned and attacked, hypocritically in the name of “human rights.”

Antisemitism has been called the world’s oldest hatred. Its roots are 2500 years old and go back to Greek Alexandria. An important reason for the longevity of antisemitism, is its ability to mutate and adapt throughout time. Jew-hatred has always attacked the central component of collective Jewish identity. In the middle ages, Jew-haters attacked Jews for their Jewish religion. In the 19th and 20th centuries, Jews were attacked for their ethnicity and “race”. In the late 19th century, the German journalist Wilhelm Marr coined the expression “antisemitism” to make Jew-hatred sound more “academic” and “legitimate”. However, the Holocaust made the term antisemitism politically incorrect. In a post-Holocaust era, Jew-haters instead call themselves anti-Zionists. Instead of attacking Jews as individuals, anti-Zionists attack the world’s collective Jew – Israel. The idea that opposition to Israel’s existence is not antisemitic is beyond absurd. Imagine, “human rights” activists who deny that they hate Arabs or Black people while simultaneously demanding the destruction of all Arab and African Black countries.

The fact that a small minority of assimilated leftist Jews and Jewish religious extremists like the crackpot Neturei Karta oppose Jewish nationhood, does not make anti-Zionism kosher. Creating a false distinction between antisemitism and anti-Zionism is not merely semantics. Roughly 50 % of the world’s Jews live in Israel and within a decade, a majority of the world’s Jews are expected to live in Israel. In addition, Israel and Zionism are central components in the Jewish identity of most Diaspora Jews. In the 21st century, anti-Zionism has become the main form of antisemitism.

Already in the 60s when Zionism was attacked, the great human rights champion Dr. Martin Luther King responded: “When people criticize Zionists, they mean Jews. You’re talking antisemitism.” Anti-Zionists are Jew-haters pretending to be “human rights” activists. Anti-Zionism constitutes racist hostility towards the Jewish people by denying it the same fundamental human right that most nations take for granted – national self-determination in its ancestral homeland Israel.