As I posted the other day, the Church of the Nativity Jeopardy clue and answer has caused the Israel-haters to implode, with Code Pink even launching a petition (compare to actual atrocities they have not launched a petition about).

It turns out that clue was never meant to air (hat tip: Matthew)

In the process of taping this clue, “BUILT IN THE 300s A.D., THE CHURCH OF THE NATIVITY” we became aware that the clue was flawed as written and that determining an acceptable response would be problematic. In accordance with our rules and in the interest of fairness, we voided the clue and threw it out. We restored Katie’s and Jack’s scores to what they were prior to the clue.  The outcome of the game was not affected. We then continued the game with this replacement clue.

Unfortunately, through human error in post-production, the uncorrected version of the game was broadcast. We regret the error and we will make every effort to ensure this never happens again.

I have no problem with Jeopardy redoing the question because the clue was problematic. According to international law, Bethlehem is not part of Israel since we did not annex it. And it is not part of ‘Palestine’ because what is Palestine? There has certainly never been a country of this name.

What I do have a problem with is the conduct of contestant Katie Needle, who as I mentioned in my previous post on the subject, is a rabid Israel hater whose response to tweets expressing anger at Jeopardy for the aired clue and answer was this: 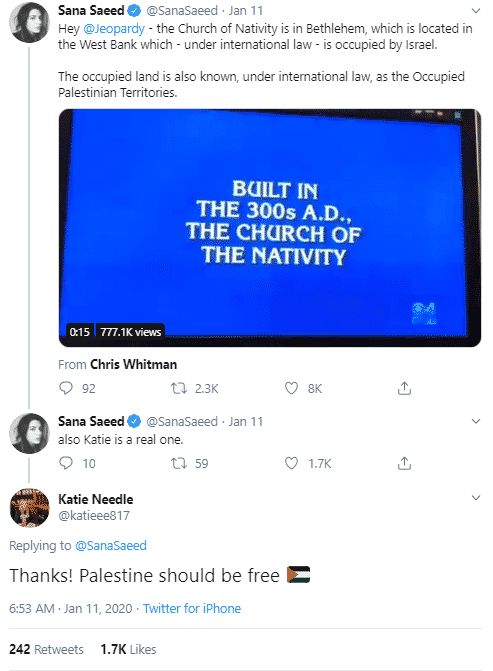 I assume she would have also been aware of the Code Pink petition.

Why didn’t she say anything, given she knew about the redo and the fact the Church of the Nativity clue was scrapped and never influenced the final result? I suspect she wanted as much controversy to be generated, in order to advance her anti-Israel agenda.

In other words, the same reason the haters are almost never honest and truthful.