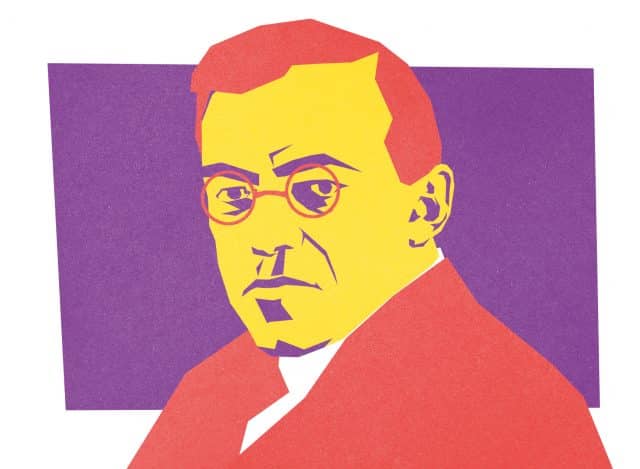 A few weeks ago I posted something about Herut, a movement honoring Jabotinsky’s ideology. A few minutes later, I started to get attacks as to why I associate my name with an organization whose ideology is fascist and calls for violence – referring to the accusations against the late Jabotinsky.

This comment triggered me in many ways. During the last two years, I have written countless papers on Zionist thinkers for my Master’s program. Jabotinsky was one of my returning figures. Eventually, my conclusion was that Ze’ev Jabotinsky was everything Theodor Herzl, Chaim Weizmann, and Ahad Ha’am were individually. But I also saw how little information is really available about him – in comparison to other thinkers. Perhaps it is because Zionist researchers are continuously finding new sources of and from Jabotinsky that hinders the public at large to truly understand who Jabotinsky was.

There are far too many labels attached to Jabotinsky: fascist, far-right – one can even find the use of “Zionist Hitler” here and there – which are used so freely.

Eventually, one faces the moral dilemma: if Jabotinsky was a fascist, who was Mussolini who murdered almost half a million people, or who was the Hungarian Ferenc Szálasi, who within a few months killed 15,000 Jews? What is the basis for such comparisons? Such as several other concepts, the ideological notions changed throughout the decades. Jabotinsky, during his lifetime, was nothing more and nothing less than the product of his own era. His surroundings heavily impacted his ideology, approach to political and foreign affairs. Did his assertiveness or his belief in nationalistic endeavors make him a fascist? If one wants to remain morally and intellectually honest, the answer is no.

However, with the contemporary and post-WWII political atmospheres, the foundation of the United Nations, or the European Union, the escalation of multiculturalism, globalism, the concept of “global village” and with the resilient spread of uber-liberal values, today Jabotinsky can be seen through their lenses as someone with fascist inclinations.

So how am I okay to associate myself with an organization that wishes to keep Jabotinsky’s legacy alive? Well, my answer is: proudly.

To recommence on the history of Herut and how Jabotinsky’s ideology is followed today, one needs to know that Herut is still among the registered political parties. The party participated in three Israeli elections and was led by Knesset members Benny Begin, Michael Kleiner, and David Re’em. Since 2009, Herut has not participated in the Israeli elections but focuses on the revitalization of the real Jabotinsky movement for Zionist education and activism. Today, World Herut is part of the World Zionist Organization and has branches in 11 countries. The organization is led by Karma Feinstein-Cohen, who left the Betar youth movement to start World Herut and its youth movement, Magshimey Herut. This is the only educational organization today that truly empowers the understanding of Jabotinsky’s ideologies.

I asked Karma Feinstein-Cohen some questions because I want to clear Jabotinsky’s name. People can attack me as to why I associate my name with Herut as much as they want, but remember one thing: not knowing your history, does not make me the bad guy here.

Why is Jabotinsky so misunderstood today?

Karma Feinstein-Cohen: More and more people realize he was brilliant and are interpreting his ideology to their convenience. I do not, however, think he is misunderstood. He was undoubtedly misunderstood before because he was a voice that came out against the establishment and the “mainstream”. He was the enemy then. He was a revisionist. Today, he is not misunderstood but, rather, misinterpreted. The most problematic approach is when people say “Okay, I am going to take only three specific sentences from his writings, and therefore I follow Jabotinsky.” He is being used for peoples’ own personal purposes. That troubles me because I grew up in a revisionist home, was educated  by his teachings and follow them as a way of life

Question: Was he really a fascist?

Karma Feinstein-Cohen: People do not know what fascism is or they do not read who Jabotinsky is, or both. Fascism is a movement or regime that praises race or nation above an individual. Any fascist enterprise is led by a dictator and is centralized in an authoritarian government. Anyone who reads Jabotinsky knows that he was opposed to the state’s intervention intensely and always said that state intervention should be held at the bare minimum. Everything should be in the hands of the individual. “ Every individual is a king” – this is what he believed in, and this is how he operated. Things (including one’s Zionism) should come from within and not from external forces. He went as far as to state that even if just one individual is being hurt by nationalism, then the whole concept makes no sense, or it is simply bad.

On the other hand, he sure believed in discipline. However, again, not a superficially forced one; rather a self-imposed discipline: “Join out of your own free will… be part of the machine that helps to create Israel.”

Question: Do you think if we had listened to him (how he so understood the Arab issue) Israel could be in a different position now?

Karma Feinstein-Cohen: Jabotinsky was a man in a uniform and trained as such. He had a military background, and it was also part of the times he lived in days of his times. He saw the Arab question from a very practical way or perspective: if your enemy sees a weakness, they will continue to fight you; they will feel that they can break you. However, if you show such strength that is unshakable, then you win. I agree completely with what Jabotinsky wrote in his essay “The Iron Wall”. Of course, the Iron Wall was not about a physical wall but a spiritual “imaginary” one. Building a strong unified Jewish nation, a strong army, a country with a Jewish majority, with a strong economy…this is what he meant by an imaginary Iron Wall. All of these combined are the key to the iron wall. When you convince the enemies that you are united and cannot be broken, they will be deterred, will lose hope of defeating you and stop fighting. Unfortunately, Menachem Begin started something that was an opening for the disaster…when you start making concessions, you continue with it.

Question: What was Jabotinsky’s greatest strength?

Karma Feinstein-Cohen: Jabotinsky did not give up and went against the mainstream. He refused to accept the things he did not believe were right and fought for justice. He was a man of principle. Furthermore, his strength was his belief in the power of education, and that it is a long-term process. He was able to see way beyond the instant gratification. Jabotinsky understood that the most difficult – but yet the most rewarding thing, in the long-haul, is education.

Question: And his greatest weakness?

Karma Feinstein-Cohen: Perhaps his strength was also his weakness; persistence can also be perceived as stubbornness. By establishing the New Zionist Movement, something new and different, he was separated from the main Zionist movement and all of its benefits. This is one of the reasons that his “New Zionist Movement” had difficulties growing. He was at the mercy of the people who had the choice of joining him in this new initiative or not.  He may have gone a little too far with that move. It was not a mistake, but it may have been premature. The established “Yishuv” in The Land of Israel was set in its ways and was not open to change. Many only began to realize the greatness of Jabotinsky after his death. His teachings still resonate well today and are able to answer many current relevant questions regarding Zionism and the Jewish People.

Well, I hope this could shed some light on the real Jabotinsky. If not, I am happy to send you my 30-page paper on him.