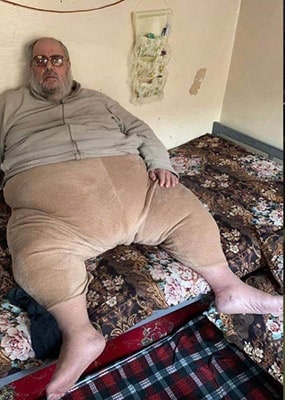 On Thursday, Iraqi forces in the city of Mosul captured ISIS leader mufti Abu Abdul Bari, also known as Jabba the Jihadi. According to reports, the 250 kg mufti had to be loaded onto a flatbed truck because he could not fit in a police car. Among other things, Iraqi forces said that the heavy weight terrorist had issued fatwas (religious decrees) “ordering the execution of scholars and clerics who refused to pledge allegiance to ISIS when the terror group occupied the city” and had ordered the destruction of a mosque.

“The mufti Abu Abdul Bari was a victim of sizeism and fat oppression”, the director of the American Fat Studies Association, Patti Chlebek Chow told CNN. “He was constantly told to lose weight in the past and this ongoing micro aggression against him caused him tremendous emotional pain. That is what led him to radicalize and join ISIS”.

“The American Fat Studies Association calls for the immediate release of Abu Abdul who is being victimized at the hands of Iraqi forces who do not appreciate his fragile mental state, especially after being arrested and rudely loaded onto a flatbed truck while being called racist names like “Jabba the Jihadi”. This is only likely to radicalize Abu Abdul further; especially as no safe space large enough to hold him has been found for him yet”.