Bernie Sanders Won’t Attend AIPAC, But Look at What He DID Attend

Bernie Sanders has signaled his intention not to attend AIPAC 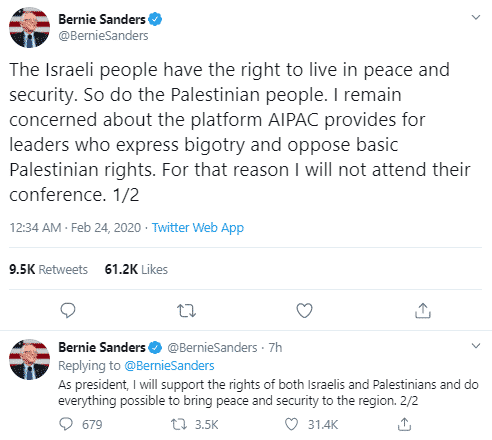 Once again, Sanders is not being upfront. He has never attended AIPAC, even though it involves a diversity of opinion on the Israel-palestinian issue

Senator Sanders has never attended our conference and that is evident from his outrageous comment.

He did however, attend last year’s Islamic Society of North America (Isna) convention, an anti-Israel hate group in which there is no diversity of opinion, and which is a platform for leaders who express bigotry and oppose basic Israeli and Jewish rights.

Like Linda Sarsour warning against “humanizing” Jewish Israelis (a year before Bernie attended the same conference).

Here is what he said about the conflict at that conference.

He could have made these same remarks at AIPAC and received an even more enthusiastic response. The fact he accuses AIPAC of bigotry, yet is willing to speak to the real bigots at ISNA, speaks volumes about Bernie Sanders.

It is no wonder (or accident) that he surrounds himself with Jew-haters.