Deadline reports how Netflix has snapped up the rights to The Life Ahead, an Italian drama in which Sophia Loren plays a Holocaust survivor. Reading this, I have been reminded of Loren’s support for Israel and the Jewish people.

She was set to perform a one-woman show back in 2016 (I am not entirely sure what happened with this, but I don’t think it went ahead, because I cannot find one report or photo about it. When Sophia Loren comes to Israel, you tend to know about it).

Before that, she was here in 2006 to attend the 70th birthday celebrations of Zubin Mehta, and before that in 1999 for Mehta’s 30th anniversary as director of the Israel Symphony Orchestra.

But her most famous visit to Israel was in 1964, when filming Judith. It would be fair to say she was a fan of us and our country. 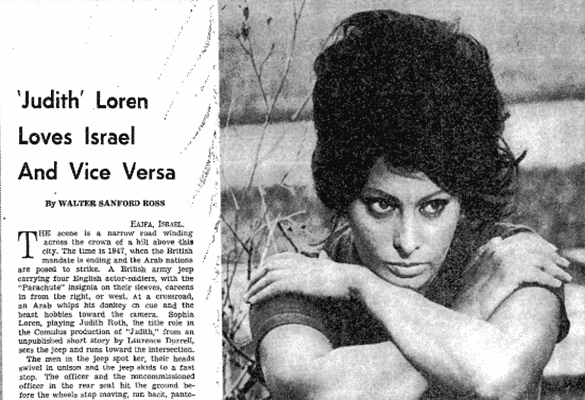 The only place in Israel where Miss Loren didn’t require a police escort was in the section of Jerusalem inhabited by the Chassidim, the ultra‐orthodox Jews who wear beards and never go to the movies.

“I’m glad you asked me,” Miss Loren said. “This is my first meal in a restaurant since we started the picture in August.”

“I have wanted to come to this country ever since the Pope’s visit last year which I followed on television,” Miss Loren said in slightly British‐accented English. “When Kurt Unger suggested I do a picture here from a story by Durrell, whose ‘Justine’ and ‘Clea’ I admire so much, I was delighted.

When Miss Loren came to Israel at the behest of Unger, an Israeli producer making his first feature motion picture, she arrived with a vocabulary of about 50 Hebrew words, of which “Shalom” (Peace) led all the rest. “I could make a few sentences,” she said, “and write my name in Hebrew. As I have had no need to write my name in Hebrew, I have forgotten this — but now I have about 200 Hebrew words and I can carry on a simple conversation.”

A biased Israeli observer said that Miss Loren has a good Hebrew accent.

Arriving in Israel on July 29, 1964, Miss Loren spent ten days getting to know the country before she began work in “Judith” for Paramount Pictures. She visited the museum known as Lochamei Hagetaot, between Haifa and Nahariya, which houses an exhibit of Nazi Jewish persecution.

The museum almost has the air of an industrial exhibit. There are shining plaster models of a neat Warsaw ghetto and of a concentration camp; and a dirty blue‐and‐ white striped concentration camp uniform is draped limply inside a glass case. Nevertheless, this is a record of human savagery and suffering before which it is impossible to remain unmoved. Miss Loren wept when she visited this place.

She had known a little of the Fascist terror against Jews in Italy. “My mother had friends in Rome who were arrested during the war,” she recalled, but I was only a child then.” In Israel, Miss Loren visited several collective settlements or kibbutzim, some of which preceded the establishment of the state of Israel. She was much impressed by the children in these places. The live separately from their parents after the age of three months, in most kibbutzim. But they are very clean and healthy, a striking contrast to the tattered, dirty Arab urchins, whose faces are purple with treated patches of impetigo, and who play in the garbage‐strewn alleys of Old Acre.

“The kibbutz is a very different world,” Miss Loren said, “but much closer to the real world. The people here have a direct way of living that is much different from Europe. It is very good to train children to work. It is this energetic youth that gives Israel its atmosphere. You drive through a modern town and the driver says ‘five years ago this was desert.’ It is fantastic to see what they have done in such a short time.

“The women here — I don’t know, but I think, they have so much more experience of men than European women,” Miss Loren went on. “They think of a man the same as themselves. They are in the Army together. They are independent. In Italy a young woman who is to marry does not have this experience; she can make a mistake, then there is no way to correct it. I think the women in Israel are better able to choose a mate.

In her 10‐day tour of the country, Miss Loren visited an army camp on the Mediterranean as a guest of a General; and went swimming there until the troops recognized her. The Israelis are an uninhibited people, even in uniform. But Miss Loren did not mind the mob scenes. “It is part of the price one pays to be a public person,” she said. “When they stop bothering me I will become upset.”

Even before “Judith” began shooting, there had been rumblings from Cairo and the rest of the United Arab Republic that there would be a boycott of all Loren movies if she persisted in making a film in Israel: Purred Sophia with the tiniest Mona Loren smile: “The Arab countries are democracies, no? I cannot believe that the people of a democracy would boycott an artist just because she works in an environment which they do not approve. I believe that the Israelis would not boycott even one of my pictures, even if it was made in the United Arab Republic.”