Palestinian and anti-Israel websites have been reporting how we unjustly closed down a 60-year-old palestinian bakery. 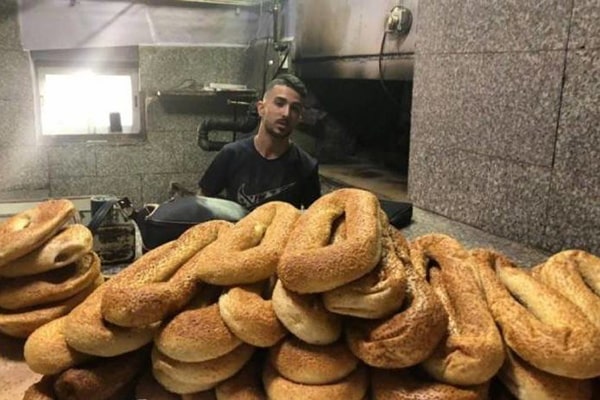 Last week in a dawn raid, Israeli police shut down a 60-year-old Palestinian bakery and arrests the owner’s son in the Old City of occupied Jerusalem.

According to local sources, police forces stormed the Bab Hitta area in the Old City and shut down the bakery, owned by the Abu Snaina family. The son of the owner, Naser Abu Snaina, was arrested during the incident.

A Palestinian bakery in the heart of Old Jerusalem has been forced to close by Israeli authorities after 60 years in business. The reason provided for the forced closure was that the bakery had been providing baked goods to Palestinian worshipers headed to Al-Aqsa Mosque to pray.

The Israeli occupation government in Jerusalem ordered the owner of the bakery, Abu Naser Abu Sneineh, to cease providing ka’ek — an oval shaped bread with sesame seeds that is extremely popular in Palestine — to people praying at the Al-Aqsa Mosque.

Many Palestinians think of ka’ek as ‘the essence of Palestine’, and the smell of the sesame bread fills the streets of Jerusalem in the early morning hours.

The Israeli municipal authorities that gave the order did not say why it was a problem for the bakery to be distributing ka’ek to worshipers, but Palestinian analysts say that it appears to be part of the ongoing pressure campaign against the mosque and the people who pray there.

The Israeli municipality had previously stormed the bakery on February 9th and threatened to close it unless Abu Sneineh fulfilled certain terms in one week.

Note how they don’t specify what are these “certain terms” to be fulfilled. That might just be because it would show the rest of the report to be bogus.

Ma’an News do mention them, but it is buried in their report of the incident (auto-translation follows):

The occupation authorities handed the owner of the bakery several conditions that he must provide in the bakery for not closing it, namely, “not to use firewood, and the presence of special rooms for flour and other for sesame and a third for workers, in addition to a special door for the entry and exit of customers, although Abu Asniya began working to provide what was possible during this period and to appoint a lawyer However, the forces stormed the bakery today and closed it. While Jerusalem activists affirmed that chasing the bakery and the pretext of “no license” is the reason for my revenge and the impossible conditions, and the real reason is to distribute cakes to the Jerusalemites after the great dawn prayer last month…

In other words, it seems the bakery was closed because the owner did not implement certain required hygienic measures necessary for a proper license issued by the Israeli Ministry of Health.

So there you have it; what appears to be yet another libel designed to demonize the Jewish state.  Hardly surprising though – it’s their bread and butter.

And no doubt had any customers been poisoned due to the poor hygiene, Israel would be the subject of another libel.